Jojutla, in Morelos state, is near the epicentre of the earthquake and was among the hardest-hit places in Mexico. Almost half of the small one- and two-story structures in the town’s centre were destroyed. Photo UNICEF/Zehbrauskas
24 October 2017

As the UN and the international community step up efforts to assist countries affected by hurricanes and earthquakes, the Economic and Social Council organized on Tuesday an ECOSOC Special Meeting on the 'Aftermath of recent hurricanes: Achieving a risk-informed and resilient 2030 Agenda,' to discuss the current situation along with the economic, social and environmental impacts on those affected.

“These disasters led to tragic loss of lives, displaced people, damaged infrastructure and homes, and disrupted livelihoods in both developed and developing countries,” said Marie Chatardová, ECOSOC President in her opening remarks.

“We have seen how inequalities exacerbated people's exposure to the impact of disaster,” she continued, noting how easily development gains can be erased if a risk-informed, resilient 2030 Agenda is not pursued.

Deputy Secretary-General Amina Mohammed said “the international community has a responsibility to support affected countries to become more resilient; to promote a risk-informed approach to reconstruction; and to strengthen their financial systems so that they can cope with such large-scale shocks.”

Participants at the UN Economic and Social Council (ECOSOC) special meeting on the ‘Aftermath of recent hurricanes and earthquakes: Achieving a risk-informed and resilient 2030 Agenda.’ UN Photo/Rick Bajornas

She recalled Secretary-General António Guterres' visit to the hurricane-devastated Caribbean earlier this month and his strong appeal not only for humanitarian aid, but also for new mechanisms for building resilience.

“Investing in disaster-resilient infrastructure and housing pays off over the long term by reducing economic losses and loss of life. We must harness the power of technology, innovation and partnerships to move towards a green, clean, sustainable energy future,” she argued.

Ms. Mohammed outlined a three-fold aim to meet immediate needs, put new concessionary financing arrangements into place and design and implement a framework for long-term financing resilience, saying “the Secretary-General looks forward to determined follow-up action by the Council to ensure strong progress on the ground.”

In his introductory remarks, General Assembly President Miroslav Lajčák said that the response must “match the magnitude and urgency of the situation.”

He stressed the significance of preparedness, by increasing resilience and reducing risks – particularly in the lead-up to next month's 23rd UN climate change conference, which offers “an excellent opportunity to reiterate our commitment towards the implementation of the Paris Agreement […] the 2030 Agenda and the Sendai Framework for Disaster Risk Reduction.”

“More must be done to respond quicker and more coherently, especially to restore basic and emergency services,” he elaborated, calling vulnerability an obstacle to achieving the Sustainable Development Goals (SDGs).

Vulnerability through climate change, conflict, instability and economic weakness, “will be a significant set-back” in the affected countries, maintained Mr. Lajèák.

Asserting that “we must 'build back better' amidst recovery efforts,” he encouraged all key stakeholders to support the recovery and rebuilding efforts in all the affected countries.

Drawing on lessons from previous disasters, participants shared country response measures and practices to manage natural disasters, and examined how the UN system and its partners can better work together at all levels to help countries effectively reduce risk.

Delivering the final statement on behalf of the President of ECOSOC, Ambassador Inga Rhonda King, Vice President of ECOSOC said that all Member States have committed to developing and implementing holistic disaster risk management at all levels in line with the Sendai Framework, emphasizing, “It is now time for action to turn these commitments into reality for all.” 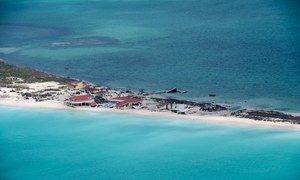