UN Photo/Evan Schneider (file photo)
Birds scavenging for food amidst the debris at the landfill in Danbury, Connecticut in the United States.
17 November 2017
Health

Every part of the planet and every person is affected by pollution – the world's largest killer – and while solutions are within reach, new policies, enhanced public and private sector leadership, redirected investments and massive funding are all desperately needed, the United Nations Environment Programme (UNEP) has said.

Pollution has significant negative impacts on human health and ecosystems, according to UNEP's most comprehensive assessment ever, which urges political leadership at all levels, high-level champions and commitments to achieve a pollution-free planet.

“It provides a clearer picture than ever before of the scale of the pollution menace – and the scale of action that will be needed,” he said, stressing: “None of us is now safe, so now all of us have to act.”

The report highlights that nearly a quarter of all deaths worldwide – or 12.6 million people a year – are due to environmental causes.

The health effects are stark, with air pollution alone killing some 6.5 million annually, affecting mostly poor and vulnerable people, according to the report.

“What makes this report different is the breadth of its analysis and the new ambition of its solutions,” explained Mr. Solheim.

The report's five key messages to advance towards the goal of a pollution-free planet are:

Environmental governance, also spotlighted in the report, is a key enabler to achieve the Sustainable Development Goals (SDGs).

“The only answer to the question of how we can all survive on this one planet with our health and dignity intact is to radically change the way we produce, consume and live our lives,” said Ligia Noronha, one of UNEP's coordinators for the Report.

In this regard, UNEP will convene the third UN Environment Assembly from 4-6 December in Nairobi, Kenya, where UNEP is headquartered.

As the world's highest-level decision-making body on the environment, the Assembly aims at engaging high-level participation to tackle the global threat of pollution. 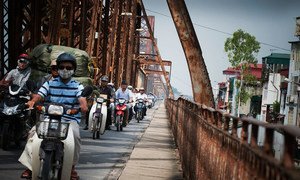 Pledges made under the Paris Agreement are only a third of what is required by 2030 to avoid the worst impacts of climate change, pointing to the urgent need to boost efforts by both government and non-government actors, the United Nations environment wing said on Tuesday.