On Friday, 75 ministers announced a landmark agreement to take urgent action to end tuberculosis (TB) by 2030 at the conclusion of a World Health Organization (WHO) conference in Moscow, Russia, on eradicating the world's deadliest infectious disease.

On Friday, 75 ministers announced a landmark agreement to take urgent action to end tuberculosis (TB) by 2030 at the conclusion of a World Health Organization (WHO) conference in Moscow, Russia, on eradicating the world's deadliest infectious disease.

“Today marks a critical landmark in the fight to end TB,” said WHO Director-General Tedros Adhanom Ghebreyesus, at the closing of the first WHO Global Ministerial Conference on Ending Tuberculosis in the Sustainable Development Era, held in Moscow.

“It signals a long overdue global commitment to stop the death and suffering caused by this ancient killer,” he added.

The newly-minted Moscow Declaration to End TB is a promise to increase multisectoral action as well as track progress, and build accountability. It will also inform the first UN General Assembly High-Level Meeting on TB in 2018, which will seek further commitments from heads of State.

Since 2000, global efforts to combat the disease have saved an estimated 53 million lives and reduced the TB mortality rate by 37 per cent. However, progress in many countries has stalled, global targets are off-track and persistent gaps remain in TB care and prevention.

As a result, TB still kills more people than any other infectious disease. There are also major problems associated with antimicrobial resistance, and it is the leading killer of people with HIV.

“One of the main problems has been a lack of political will and inadequate investment in fighting TB,” stressed Mr. Tedros. "Today's declaration must go hand-in-hand with increased investment."

More than 1,000 participants took part in the two-day conference, which was attended by ministers and country delegations, as well as representatives of civil society and international organizations, scientists and researchers.

The end result was a collective commitment to ramp up action on four fronts.

The first pledge was to rapidly move to achieve universal health coverage by strengthening health systems and improving access to people-centred TB prevention and care so no one is left behind.

Secondly, was the assurance that sufficient and sustainable financing would be mobilized through increased domestic and international investments to close implementation and research gaps.

The third commitment was to advance research and development of new tools to diagnose, treat, and prevent TB.

Finally, the ministers vowed to build an accountability framework to track and review progress on ending TB, including multisectoral approaches.

They also promised to minimize the risk and spread of drug resistance and do more to engage people and communities affected by, and at risk of, tuberculosis. 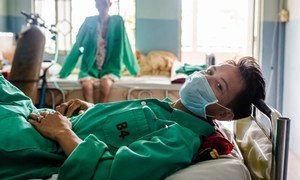 Progress has not been fast enough over the past year to reach global and regional targets on stopping the spread of tuberculosis (TB), or to make real headway in closing persistent gaps in TB care and prevention, the World Health Organization warned Monday.