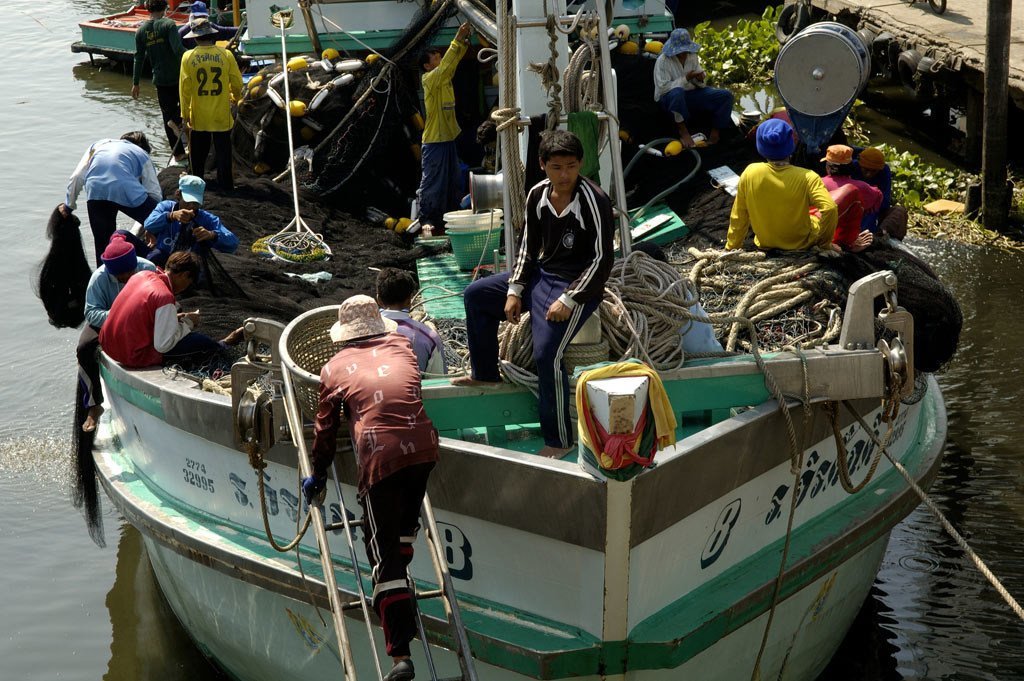 ILO/Thierry Falise (file)
Migrants from Myanmar working on a Thai boat in the Mahachai port.
6 November 2017
Migrants and Refugees

With ever-increasing numbers of people on the move, travelling away from their homelands in search of better opportunities, a United Nations regional meeting opened today in Bangkok, Thailand, exploring options to make migration safer and better protect their rights.

With ever-increasing numbers of people on the move, travelling away from their homelands in search of better opportunities, a United Nations regional meeting opened today in Bangkok, Thailand, exploring options to make migration safer and to better protect their rights.

Convoked as one of the five regional preparatory meetings for the Global Compact for Safe, Orderly and Regular Migration, the meeting in Bangkok will focus on all dimensions of international migration.

“Migration has been a positive force for millions of people: migrants themselves, those they leave behind and for the new communities who host them. Yet perceptions of migrants as a burden or even as a threat, have risen, in some countries, from the fringes to the mainstream,” said Louise Arbour, the Special Representative of the Secretary-General for international migration, in her keynote address at the meeting.

“The result is both rising intolerance and an environment in which vocal anti-migration sentiments fester,” she added.

Noting, in particular, the area of labour migration – the predominant form of migration in the Asia-Pacific region – Ms. Arbour highlighted that with sound, gender-responsive and rights-based policies, such migration can deliver significant benefits and opportunities for migrant workers, countries and host communities as well as for countries of origin, as well as contribute to economic growth, create jobs and promote innovation.

According to estimates, the Asia-Pacific region hosts about 62 million migrants from around the world, and is the region of origin for over 102 million international migrations, with most of the migrants engaged in labour migration, taking up low-skilled work in developing countries.

Last year, the remittance sent back by Asian and Pacific migrant workers totalled almost $269 billion and accounted for a significant portion of the gross domestic product in some countries. However, many migrants face discrimination and rights abuses due to their race, gender, ethnicity or culture.

“In a world on the move, addressing these challenges directly is all the more critical,” she added, underscoring the potential for migrants in filling labour force gaps due to factors such as ageing populations, as well as to reap the benefits of opportunities presented by ever more connected and integrated regions and strengthen people-to-people connectivity.

Although the debate on migration has largely focused on Europe, the global compact being negotiated must be adapted to the realities and peculiarities of each region, including Africa, where more than half of migrants moved to other countries on the continent, a senior United Nations official said Thursday.