UN 'will walk with Haiti' on path towards sustainable development, senior official pledges

United Nations Deputy Secretary-General Amina Mohammed and UN Special Envoy for Haiti Josette Sheeran wrapped up a three-day visit to the island on Sunday, pledging more help to defeat cholera and assist the Government in achieving the broader aims of the UN 2030 Agenda for Sustainable Development.

“The UN will walk this path with Haiti,” Ms. Mohammed said on Twitter, referring the work under way inside Haiti towards becoming an emergent country by 2030, the finish line agreed by all nations to achieve of the Agenda and its landmark 17 Goals, knows as the SDGs.

The high-level delegation was dispatched by Secretary-General António Guterres to reaffirm the commitment of the United Nations to the Haitian people in a “new spirit of partnership.”

In an opinion piece late last week in the Miami Herald, the UN chief said the partnership would stretch across the UN's work on the island – including to continue addressing Haiti's cholera challenge and the “unacceptable incidents” of sexual exploitation and abuse by UN personnel – and aims to help Haiti move “from an emergency approach to durable solutions, from assistance to investment support, from handouts to hand-to-hand cooperation for sustainable development, to democracy and dignity for all Haitians.”

On Saturday, Ms. Mohammed echoed the “new spirit of partnership” set out by Mr. Guterres, saying: “We come to try to find another way to do things better; because in the past, we have fallen short. We were not able to do what we had planned,” she said in a joint press conference with Haitian President Jovenel Moise in the capital, Port-au-Prince.

The visit of the two UN officials comes just after the appointment of Susan Page, of the United States, as the Special Representative of the Secretary-General and Head of the UN Mission in Support of Justice in Haiti (UNMIJUSTH), which succeeded the UN Stabilization Mission, known as MINUSTAH, on 16 October.

The role of the new UN mission is to assist the Haitian Government to strengthen the rule of law institutions, to continue to develop the capacity of the national police and to promote human rights.

As a key part of the visit, the two UN officials met families affected by cholera and coping with lack of access to water and sanitation.

On her visit to Haiti, UN Deputy Secretary-General Amina Mohamed co-chaired a High-Level Cholera Committee meeting with the Haitian Government, and called for efforts to achieve zero transmission of cholera.

While cholera transmission has dropped dramatically, from over 18,000 new cases per week at the onset of the epidemic in 2010, to 250 per week this year, success will require more funding to maintain the highly effective work of emergency response teams, and commitment to the fight against cholera in the medium and long-term, the officials jointly agreed.

Urging UN Member States and partners to provide comprehensive support, the Deputy Secretary-General emphasized during the meeting that “addressing the root causes of cholera in Haiti is critical to achieving the Sustainable Development Goals (SDGs). Additionally, in the immediate term, we urgently require funding to ensure continued operation of the rapid response teams; failure to do so risks losing the gains achieved to date.”

The Deputy Secretary-General and the Special Envoy also witnessed the efforts of the “many heroes” working to eradicate the disease. Their visit was also an opportunity to learn about successful cholera control programmes, including in communities that ended open defecation, mobilized to build toilets, and raised awareness of the importance of sanitation.

♦ Receive daily updates directly in your inbox - Subscribe here to a topic.
♦ Download the UN News app for your iOS or Android devices.
sustainable development|Haiti 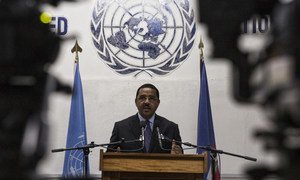 The United Nations will remain side by side with Haiti on the country’s path to sustainable development, the Organization’s senior official in the island nation has said.