UNICEF/Mahmoud
A school guard walks through a school in Yemen's capital Sana'a that was heavily damaged during an air strike on the building next to it. (File)
18 October 2017

“As of July 2017, 1,600 schools have been partially or totally destroyed, and 170 have been used for military purposes or as shelter for displaced families,” said Geert Cappelaere, the UNICEF Regional Director for the Middle East and North Africa, in a statement today.

The violence has forced one in ten schools across the country to close, and textbooks and other school materials are in severely short supply, he added, noting that the beginning of the school year has been postponed several times from its usual September start.

Adding to the crisis is the fact that three-quarters of the teachers in Yemen have not been paid in nearly a year, compelling them to resort to extreme measures to survive.

One such case is that of Hassan Ghaleb, a teacher for the past 20 years and the sole breadwinner for his family of four, who was evicted from his home with his children.

He had to sell what was left of his furniture just to feed them and treat his sick sister.

“How can [they] teach if [they themselves are] in need?” questioned UNICEF, noting that over 166,000 teachers across the war-torn country are in a similar situation.

The children of Yemen have suffered in ways that no human being should have to bear. Education is their only way to secure a better future

Lack of education and the protective environment provided by a school is not only robbing the children of some semblance of a normal childhood, it is also leaving them vulnerable to recruitment into fighting or early marriage.

“Ongoing humanitarian efforts are only a drop in the ocean of suffering that Yemen has become,” underscored Mr. Cappelaere, urging the parties to the conflict to protect schools, refrain from using schools for military purposes and work together to find an urgent solution to the salary crisis so that children can learn.

He also called on donors to step up their assistance and enable the payment of incentives to education personnel, health workers and other civil servants who deliver vital services for children.

“The children of Yemen have suffered in ways that no human being should have to bear. Education is their only way to secure a better future and to help put Yemen on the path to peace,” he said. 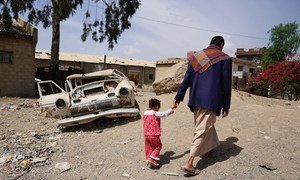 Parties to the conflict in Yemen are eroding the path to peace while the country’s people suffer amid a man-made humanitarian catastrophe, said today a senior United Nations official, urging Security Council member countries to use their political and economic powers to pressure warring sides to commit to a path of peace.