UNHCR
UNHCR teams in Libya have been responding to the urgent humanitarian needs in and around Sabratha, a city located some 80 kilometres west of the Libyan capital, Tripoli.
17 October 2017

“The refugees and migrants were taken to a hangar in the Dahman area in Sabratha that has been serving as an assembly point since the onset of the crisis,” Andrej Mahecic, Spokesperson for the Office of the UN High Commissioner for Refugees (UNHCR) told reporters Tuesday at the regular press briefing in Geneva.

From the hangar in Sabratha – a main departure point for migrant boats attempting to journey across the Mediterranean to Europe – they are being transferred to official detention centres for humanitarian assistance by Libyan authorities, who estimate that an additional 6,000 migrants and refugees remain captive by smugglers. If confirmed, it would bring the total number of those held to 20,500 – including those in official detention centres.

“As a priority, UNHCR teams have been working on identifying refugees and they continue to advocate for their release. In some locations, UNHCR has provided tents that are being used as makeshift hospitals where UNHCR doctors are providing medical assistance,” said Mr. Mahecic.

“Colleagues on the front lines describe a picture of human suffering and abuse on a shocking scale,” he elaborated, noting that the rescued refugees and migrants are visibly traumatized – most of whom say they were subjected to numerous human rights abuses, including sexual and gender-based violence, forced labour and sexual exploitation.

He also pointed to “a worrying number of unaccompanied and separated children, many under the age of six,” saying that many of them report losing parents on the journey to Libya or in the chaos that resulted during the last few weeks.

While UNHCR is working very closely with the authorities to respond to the growing needs, the scale of the emergency has overwhelmed existing facilities and resources. Detention centres and assembly points are at full capacity and lack basic amenities, like water tanks and sanitation facilities. Many people, including children, have to sleep outside in the open.

“The devastation in Sabratha further reaffirms the need for international action and highlights the high price refugees have to pay to reach safety in the absence of safe legal pathways,” stressed Mr. Mahecic. “UNHCR will continue to call on resettlement countries and the international community to step forward and open more resettlement places and look for a way to protect vulnerable refugees who need international protection.”

For its part, the International Organization for Migration (IOM) is providing support to those in Zuwara and the Sabratha assembly point in the form of core relief packages, which include mattresses, blankets, pillows and hygiene kits at six separate locations and more than 100,000 meals.

Pointing out that the migrants are from almost a dozen nations, IOM reported that out of 1,631 interviewed, 44 per cent wished to return to their countries of origin through IOM’s Voluntary Humanitarian Return Programme. To this end, IOM has provided online consular sessions for 332 migrants to speed up the travel document issuance procedures.

The UN migration agency strongly advocates for alternatives to detention.

“We are concerned about the large number of migrants transferred to detention,” said Othman Belbeisi, IOM Libya Chief of Mission, saying they are overcrowded and do not meet the minimum international human rights standards.

“We stand ready to provide any necessary support to the Libyan authorities in providing alternatives to detention, especially for the most vulnerable groups, including pregnant women and children,” he underscored. 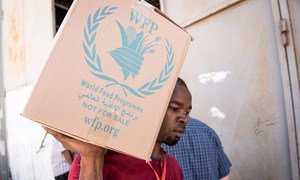 United Nations relief agencies have upped their response in western Libya’s Sabratha region following intensification of conflict that has already driven over 15,000 people from their homes.