“It is clear that wars and climatic change are a cause of hunger, so let’s not present it as if hunger is an incurable disease,” the Pontiff said during his key note address marking the Day at headquarters of the UN Food and Agriculture Organization (FAO).

Under this year’s theme ‘addressing migration through investing in food security and rural development,’ Pope Francis called for governments worldwide to collaborate to ensure voluntary and safer migration; for a disarmament commitment; and to protect the planet while using its resources – producing and consuming food.

Noting that it was unfortunate that some countries are moving away from the Paris Agreement on climate change, Pope France underscored” “What is at stake is the credibility of the whole international system.”

Referring to the negotiation of a Global Pact for Safe, Regular and Orderly Migration – he asserted that managing human mobility “requires coordinated, systematic intergovernmental action in line with existing international norms, and full of love and intelligence.”

This year, World Food Day is being marked as hunger is on the rise for the first time in over a decade, affecting 815 million people – 11 per cent of the global population. The increase is largely due to the proliferation of violent conflicts and climate-related shocks, which are also major drivers of distress migration.

“It is our intention to address the root causes of migration, such as poverty, food insecurity, inequality, unemployment and lack of social protection,” said FAO Director-General José Graziano da Silva.

“We firmly believe that increasing investments in food security, sustainable rural development and in efforts to adapt agriculture to climate change, will help create the conditions whereby people, especially the youth, will no longer be forced to abandon their lands in order to seek a better life elsewhere,” he added.

“We will never achieve Zero Hunger by 2030 until we end conflict,” he stressed.

“I call on the people in power, the people with guns, to stop the fighting now,” said Mr. Beasley, who has met many people fleeing conflict and violence in Yemen, South Sudan and Bangladesh over the past few months.

“I saw their wounds with my own eyes and I heard their stories with my own ears. They were frightened, hungry and malnourished after enduring a nightmare that most people cannot even imagine. If we are truly going to end hunger, we must stop this kind of inhumanity,” he said.

The future of migration

In his statement commemorating the day, William Lacy Swing, Director General of the International Organization for Migration (IOM), called climate action “paramount” in mitigating displacement saying: “Climate change is having far-reaching effects on agricultural productivity and food security. It is among the main reasons for the record numbers of people compelled to migrate from rural areas to towns and cities around the world.”

Under the premise that migration should be a choice, not a necessity, IOM is working towards this change with FAO, as 2018 co-chairs of the UN Global Migration Group – collaborating on projects to strengthen the resilience of vulnerable populations in rural areas to the impacts of natural hazards, climate change, food security and displacement.

“It is a cooperation that I think will continue to grow and strengthen as migration continues to be a megatrend in the world, which will become only greater with the worsening effects of climate change,” Mr. Swing said. 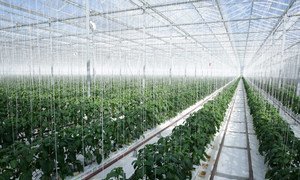