Noting that the humanitarian crisis that has resulted in displacement of hundreds of thousands of Rohingyas from Myanmar not only provides a “breeding ground” for radicalization, but also puts vulnerable people – including young children – at grave risk, United Nations Secretary-General António Guterres called for “swift action” to prevent further instability and find a durable solution.

“The situation has spiralled into the world’s fastest developing refugee emergency and a humanitarian and human rights nightmare,” the Secretary-General said today at a Security Council meeting on the situation in Myanmar.

At least 500,000 civilians have fled their homes in the country’s northern Rakhine state since late August and sought refuge in Bangladesh. According to estimates, some 94 per cent among them are members of the minority Muslim Rohingya community.

There have also been reports of burning of Muslim villages, as well as looting and acts of intimidation. Authorities in Myanmar have indicated that at least 176 of 471 Muslim villages in northern Rakhine have been totally abandoned.

“We have received bone-chilling accounts from those who fled – mainly women, children and the elderly,” added the UN chief, noting that testimonies pointed to serious violations of human rights, including indiscriminate firing of weapons, the presence of landmines and sexual violence.

“This is unacceptable and must end immediately.”

Secretary-General António Guterres briefs the Security Council meeting on the situation in Rahkine state of Myanmar, which has seen hundreds of thousands of Rohingya refugees fleeing to neighbouring Bangladesh over the last several weeks. UN Photo/Kim Haughton

Failure to address the violence could result in a spill-over into central Rakhine – where an additional 250,000 Muslims could potentially face displacement – Mr. Guterres warned, stressing that Government must ensure the safety and security of all communities and uphold rule of law without discrimination.

In his briefing, the Secretary-General also underscored that UN agencies and their non-governmental partners must be granted immediate and safe access to all affected communities.

Speaking also on the need to ensure safe, voluntary, dignified and sustainable return of the refugees to their areas of origin, Mr. Guterres noted that the 1993 Joint Statement of the Foreign Ministers of Bangladesh and Myanmar could be a useful starting point, but it is not sufficient in the present circumstances, in particular as it does not refer to resolving the root cause of displacement as well as because it requires documents that the refugee Rohingya may not be able to provide.

“Ensuring the safe, voluntary and dignified return of refugees to Rakhine – in line with international refugee law – will require the restoration of mutual trust among the communities,” he said, noting that improved inter-communal relations forms a critical part of a sustainable solution to the crisis.

Mt. Guterres further noted that the issue of protracted statelessness must be resolved.

“All others must be able to obtain a legal status that allows them to lead a normal life, including freedom of movement and access to labour markets, education and health services,” he added.

In his remarks, the UN chief also spoke of a donor conference to be convened by the Office of the UN High Commissioner for Refugees (UNHCR), the Office for Coordination of Humanitarian Affairs (OCHA) and the International Organization for Migration (IOM) as well as noted efforts by regional actors to help address the crisis.

“I look forward to effective and credible follow-up to the authorities’ stated commitment to greater access, including for the international community, the media and humanitarian actors,” he said, noting: “The regional cooperation with Myanmar will also be essential, and the United Nations fully stands behind this.” 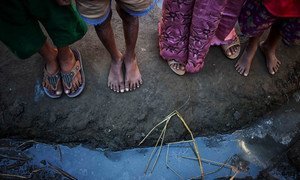 Warning that the horrific accounts of rape and sexual assault against Rohingya women and girls fleeing unrest in Myanmar could be “just the tip of the iceberg,” the United Nations Population Fund (UNFPA) underscored the need to ensure that such violence is prevented and called for additional resources so that it can reach all those in need of assistance.