OCHA/Giles
A displaced family sits in their tent in the Khamir IDP settlement in Yemen. The father, Ayoub Ali, is 25 years old and has four children with his wife Juma'a.
22 September 2017

Efforts to respond to the humanitarian crisis in Yemen, currently the world’s largest, are being hampered by insufficient funding and other challenges, the top United Nations relief official warned today.

“Despite the extraordinary scale of the suffering linked to the brutal conflict, including the threat of famine and the world’s worst cholera outbreak, Yemen does not receive the international attention it deserves,” Under-Secretary-General for Humanitarian Affairs Mark Lowcock told a high-level event held in the margins of the General Assembly.

Mr. Lowcock, who is also UN Emergency Relief Coordinator, noted that nearly 21 million people are in need of emergency aid or protection, most of them children, and that this year’s humanitarian response plan for Yemen is just 45 per cent funded, which means short-changing famine prevention efforts, and discontinuing programmes.

The World Food Programme (WFP) did reach 7 million people last month, helping to avert potential famine – but this came at the cost of cutting rations for about half of recipients to 60 per cent of the normal level.

“Yemen is an absolute catastrophe,” WFP Executive Director David Beasley said at a separate event today. “Of the less than 30 million people that live there, 20 million literally don’t know what’s going to happen from day to day; 17 million of them are on the brink of famine.”

He noted that WFP has received about half of the funds its needs, adding that the Gulf States, in particular, need to “step up and fill in the gap.”

Mr. Lowcok called on donors to provide full funding for the Humanitarian Response Plan, noting that the Yemen Humanitarian Fund is one of the quickest and most effective ways to support the most urgent priorities.

Although only negotiations and a political settlement can put an end to this appalling, man-made crisis, all parties to the fighting in Yemen must be repeatedly reminded to comply with international humanitarian law, taking constant care to spare civilians and civilian infrastructure, he said.

The coordinated effort by partners in all sectors is making an enormous difference, he added, but much more remains to be done.

Among the other challenges faced, Mr. Lowcock cited the delay or blockage of humanitarian assistance or the movements of humanitarian staff – including for the cholera response by de facto authorities in Sana’a; commercial imports restrictions; the closure of Sana’a airport to commercial traffic; and salary arrears for health workers, teachers and water and sanitation staff that are accelerating the collapse of essential services.

“Overcoming each of these obstacles is within the reach of the international community,” said Mr. Lowcock.

In an interview with UN News, UN Humanitarian Coordinator in Yemen Jamie McGoldrick said he met with Member States this week in New York and asked them to provided more funding.

Mr. McGoldrick also met with those involved in the conflict and reminded them of their obligations to abide by international humanitarian law.

“Enough is enough,” he said. “The suffering should not be the DNA of the people in that country.” 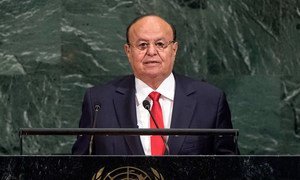 Addressing the United Nations General Assembly today, President Abed Rabbo Mansour Hadi of Yemen affirmed his readiness to bring an end to the country’s three-year conflict and seek a “strong, fair and lasting peace,” out of a sense of full responsibility for the Yemeni people