UN Photo/Paulo Filgueiras
Signing ceremony at UN Headquarters in New York for the Treaty on the Prohibition of Nuclear Weapons, 20 September 2017.

20 September 2017
The world’s first legally-binding treaty prohibiting nuclear weapons opened for signature today at United Nations Headquarters in New York at a ceremony at which speakers from international organizations, governments and civil society hailed this milestone in achieving a world free of such arsenals as well as the work that remains to be done.

“The Treaty on the Prohibition of Nuclear Weapons is the product of increasing concerns over the risk posed by the continued existence of nuclear weapons, including the catastrophic humanitarian and environmental consequences of their use,” UN Secretary-General António Guterres said at the ceremony, held on the margins of the General Assembly’s high-level debate.

“The Treaty is an important step towards the universally-held goal of a world free of nuclear weapons. It is my hope that it will reinvigorate global efforts to achieve it,” he added, acknowledging the contributions made by civil society and the hibakusha – the atomic bomb survivors.

At the same time, Mr. Guterres, highlighted the difficult road ahead by recalling that there remain some 15,000 nuclear weapons in existence. “We cannot allow these doomsday weapons to endanger our world and our children’s future,” he said.

The Treaty – adopted on 7 July this year at a UN conference in New York by a vote of 122 in favour to one against (Netherlands), with one abstention (Singapore) – prohibits a full range of nuclear-weapon-related activities, such as undertaking to develop, test, produce, manufacture, acquire, possess or stockpile nuclear weapons or other nuclear explosive devices, as well as the use or threat of use of these weapons.

However, nuclear-armed States and most of their allies stayed out of the negotiations. Immediately following its adoption, the United States, the United Kingdom and France issued a joint press statement saying that they “have not taken part in the negotiation of the treaty… and do not intend to sign, ratify or ever become party to it.”

The Treaty will enter into force 90 days after it has been ratified by at least 50 countries.

At today’s ceremony, chaired by UN High Representative for Disarmament Affairs Izumi Nakamitsu, 42 countries signed the Treaty, with more expected later in the day. The Holy See and Thailand not only signed but also ratified it.

The President of the General Assembly, Miroslav Lajčák, noted at the ceremony that the Treaty demonstrates the will of Member States to bring about change.

“It will raise public awareness about the risks of nuclear weapons. It will keep us on track for achieving our goal of a world in which nuclear weapons exist only in movies or books. But we need to do more to get the whole way there.” 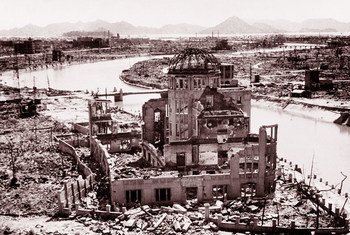 7 July 2017
Countries meeting at a United Nations conference in New York today adopted the Treaty on the Prohibition of Nuclear Weapons, the first multilateral legally-binding instrument for nuclear disarmament to have been negotiated in 20 years.