UN Photo/Mark Garten
Secretary-General António Guterres and US President Donald Trump (right) during the high-level meeting on reform of the United Nations.
18 September 2017

More than 120 countries today declared their support for a series of reforms aimed at overhauling the United Nations bureaucracy to make the world body stronger and more responsive to the people it serves.

“Our shared objective is a 21st century UN focused more on people and less on process, more on delivery and less on bureaucracy,” the Secretary-General said at the event hosted by United States President Donald Trump.

He added that “value for money while advancing shared values – this is our common goal.”

“To serve the people we support and the people who support us, we must be nimble and effective, flexible and efficient,” he stated.

The 10-point Declaration expresses support for UN reforms to simplify procedures and decentralize decisions, with greater transparency, efficiency and accountability.

In recent months, the UN embarked on plans to achieve gender parity among the Organization's middle and senior-management positions, and is working to reorganize the peace and security sections so they are refocused on prevention and mediation.

The UN has also prioritized ending sexual exploitation and abuse. At a high-level meeting scheduled for today, the UN is due to announce a 'Circle of Leadership' which will include Heads of State and Government committed to ending impunity and strengthening measures to prevent sexual exploitation and abuse in peacekeeping and political mission, among other international deployments.

In his speech today, Mr. Guterres also noted reforms to the UN's development system, to become more coordinated, focused on the people and more accountable to better assist countries along the 17 priorities in the 2030 Agenda for Sustainable Development.

These aims, Mr. Guterres said, will be measured through “tangible results in the lives of the people we serve” and in “the trust of those who support our work through their hard-earned resources.”

The UN chief quoted President Trump who he said on multiple occasions noted that “the UN has tremendous potential.”

“All of us have a responsibility to make sure we live up to it,” Mr. Guterres said. 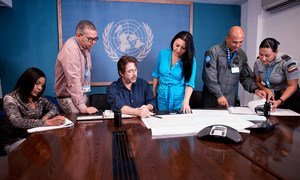 INTERVIEW: UN should be flagbearer when it comes to gender parity, stresses top official

This week Secretary-General António Guterres launched a new strategy to achieve gender parity across the United Nations – something he described as “an urgent need, a moral duty, an operational necessity – and a personal priority.”