15 September 2017
Expressing concern over continued violence in the Central African Republic and the resulting “massive new levels” of displacement, the United Nations refugee agency has underscored the need to ensure that relief workers are not made targets of hostilities and are given the humanitarian security they need to carry out their mission.

“Since May, fresh and fierce clashes between armed groups in the CAR have wrought increasing suffering, deaths and destruction of property,” said Andrej Mahecic, a spokesperson for the Office of the UN High Commissioner for Refugees (UNHCR).

“Many newly displaced people speak of having witnessed killings, robberies, lootings and kidnappings. Even after reaching safe locations, they often risk assault by armed groups, if they venture outside,” he added.

According to the UN agency, the crisis, well into its fourth year, has left one in every two Central African in need of humanitarian assistance or protection to survive and, if left to fester, the violence could negate the progress towards recovery in the country.

The violence has also driven over half a million people from CAR to seek refuge in neighbouring countries and displaced an additional 600,000 people within the country.

The level of insecurity has also prevented UNHCR and other relief organizations to fully assess the full extent of damage or displacement from the recent violence.

“Some of our planned humanitarian deliveries by air have also been delayed or blocked, due to the armed groups’ presence [and] aid agencies, including UNHCR, are increasingly among those targeted by armed groups and have, in some instances, been compelled to temporary withdraw their personnel,” said Mr. Mahecic.

“Despite the challenges, we continue to help those displaced in areas like the Haute-Kotto provincial capital of Bria, which was at the centre of much of the displacement in the east,” he added, noting that the UN agency’s response is struggling due to lack of resources.

Earlier this year, UNCHR issued an appeal for $209 million for its operations within the country as well as to assist refugees from the Central African Republic in neighbouring countries. However, only 9 per cent of the appeal has been funded thus far. 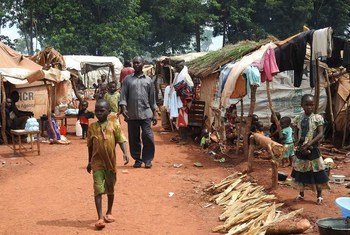 15 August 2017
The Central African Republic (CAR) has spiralled into violence and remains one of the worst countries in the world to be a child and “right now there are few eyes looking at them and few hands trying to help,” the United Nations children's agency said today.