IFAD/Lana Slezic
A woman prepares bread at her home in Faqua village, Jordan for sale in the local market. Since her husband passed away in 2002, she has had to take care of her family of nine children. With her small business of bread, cheese and Jabeen (dry yogurt) she earns enough to survive.

Noting that the world economy in 2017 “is picking up but not taking off,” a new United Nations trade and development report has cautioned against fiscal austerity and harnessing finance to support job creation and infrastructure investment.

According to the report's findings, growth this year is expected to reach 2.6 per cent, slightly higher than last year, but still well below the pre-financial crisis average of 3.2 per cent.

Most regions are expected to register small gains, with Latin America exiting recession and posting the biggest turnaround, even if only at 1.2 per cent growth. The Eurozone is expected to see a 1.8 per cent growth while the United States could witness 2.1 per cent.

However, with insufficient global demand, trade remains sluggish and only minor improvement is anticipated this year, primarily due to a recover in South-South trade (led by China).

Furthermore, in the absence of a coordinated expansion led by the advanced economies, sustaining the limited global economic acceleration hinges on lasting improvements in emerging economies, noted UNICTAD.

An 'age of anxiety'

Further in the news release, UNCTAD reported that “debt explosion” and the rise of “super- elites” (loosely identified as the top 1 per cent) – two of the largest socioeconomic trends in recent times – could be linked through the deregulation of financial markets, to the widening ownership gap of financial assets and a fixation on short-term returns.

“As such, inequality and instability are hard-wired into hyperglobalization [making] for a world with insufficient levels of productive investment, precarious jobs and weakening welfare provision,” it noted, adding:

“This has become self-perpetuating, with the run-up to a crisis driven by the 'great escape' of top incomes, while their aftermath is marked by austerity and stagnating incomes at the bottom.”

The report also examined other factors leading to growing anxiety, pointing to increased automation through employment of robotics as well as gender dimensions, including discrimination based on gender in the job market, as factors causing much worry in economies.

It also warned that warns that failure to correct the excesses of hyperglobalization could not only jeopardize social cohesion but also diminishing trust in both markets as well as in political actors.

A global new deal for the 21st century needed

Drawing lessons from 1947, when the International Monetary Fund, the World Bank, the General Agreement on Tariffs and Trade and the UN joined forces to rebalance the post-war global economy, the UNCTAD report called for an equally ambitious and collaborative effort to tackle the inequities of hyperglobalization to build inclusive and sustainable economies.

“The successes of the New Deal of the 1930s in the United States owed much to its emphasis on counterbalancing powers and giving a voice to weaker groups in society, including consumer groups, workers' organizations, farmers and the dispossessed poor,” said UNCTAD, stressing that the lesson still holds true today.

“In today's integrated global economy, governments will need to act together for any one country to achieve success,” it added, urging countries to seize the opportunity offered by the Sustainable Development Goals (SDGs) and put in place a “global new deal” for the twenty-first century. 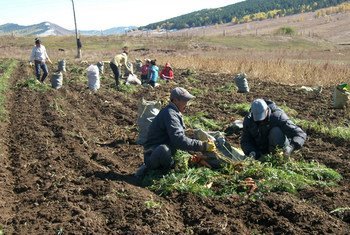