Internet users worldwide are becoming more worried about their privacy online and many question the protections offered by Internet and social media companies, a new United Nations survey has found.

This waning of confidence could imperil the spread of online shopping even as newcomers to the Internet may be especially vulnerable to abuses because they are unaware of the risks.

“Trust is essential for the successful expansion and use of e-commerce platforms and mobile payment systems in developing nations,” said Fen Osler Hampson, Director of Global Security and Politics at Centre for International Governance Innovation (CIGI), a think tank that helped conduct the study.

The survey was carried out by CIGI and Ipsos, in collaboration with the UN Conference for Trade and Development (UNCTAD) and the Internet Society.

Users in large emerging economies expressed the most “trust” in Internet firms with nine in ten expressing such faith in China, India and Indonesia and more than eight in ten doing so in Pakistan and Mexico.

To the contrary, fewer than 60 percent of consumers in Japan and Tunisia expressed such “trust.”

The evidence of mounting privacy concerns coincides with sharper public scrutiny of the protection policies of major Internet firms – over concerns fuelled by the revelation that a political data firm gained access to millions of Facebook users’ personal data without their consent.

“The survey underlines the importance of adopting and adapting policies to cope with the evolving digital economy” said Shamika Sirimanne, the Director of Technology and Logistics Division at the UN agency, which deals with the economics of globalization.

“The challenge for policymakers is to deal holistically with a number of areas – from connectivity and payment solutions to skills and regulations,” she explained.

Is technology worth the cost? Yes and No

As e-commerce soars, there is also a general increase in the number of people using mobile payments and non-traditional means of paying for services, such as tapping one’s smart phone to board trains or scanning it to pay for a cup of coffee.

The use of smart phones to make cashless purchases is in fact far higher in many developing countries than it is in the United States and much of Europe, the study noted.

In addition, many people, especially in the developing world, expressed the view that new technology is “worth what it costs.”

At the same time, some users in developed countries expressed views to the contrary. Their main worry, the survey found, is that technology will result in the loss of employment.

The launch of the survey coincides with UNCTAD’s E-Commerce Week – the leading forum for Governments, private sector, development banks, academia and the civil society to discuss development opportunities and challenges before the evolving digital economy. 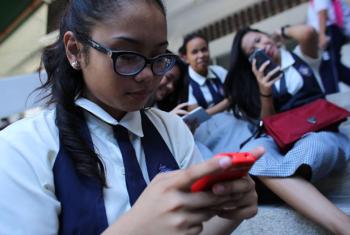 Every half a second, every day, a child goes online for the first time – tapping into all the great opportunities the Internet has to offer, but facing grave risks, the United Nations Children’s Fund (UNICEF) said Tuesday, calling for urgent action to protect them from sexual exploitation, cyberbullying and the misuse of their private information.