UN Photo/Manuel Elías
Miroslav Lajčák, the President of the 72nd session of the General Assembly, briefs journalists following his election in May 2017.
12 September 2017
UN Affairs

Miroslav Lajčák hopes that under his presidency the United Nations General Assembly will overcome narrow national interests and produce tangible benefits for people. The career diplomat from Slovakia, who was elected by the 193-member Assembly as its President, highlighted two of the world’s most pressing issues – conflict and migration – as his priorities.

“My hope is that the 72nd session of the General Assembly will be a good one, a productive one that will result in many concrete solutions to the world’s problems,” Mr. Lajčák told UN News ahead of the session’s opening today.

The career diplomat from Slovakia, who was elected by the 193-member Assembly as its President, highlighted two of the world’s most pressing issues – conflict and migration – as his priorities.

“I wish to pay attention to what we can do better to prevent conflict. Because by avoiding conflict, we save human lives and we also save money,” he said, while noting that Member States will also be devoting time and energy to the drafting of a global compact on migration, which is expected to be adopted in 2018.

Having been through difficult missions, particularly in the Balkans, Mr. Lajčák said he understands what it takes to succeed in multilateralism.

“If we disagree, this is not the reason to punish each other. It’s the reason to sit down and try to find a consensus or compromise. This is what I understand as the essence of diplomacy,” he said.

Miroslav Lajcák outlines priorities for his tenure as President of the 72nd session of the UN General Assembly, aiming to bolster the world body’s efforts to promote peace and security, sustainable development and human rights.

UN News: How do you view the role of the General Assembly in the 21st century?

Miroslav Lajčák: The General Assembly is a unique organ. It’s the most representative organ of the United Nations, where all 193 Member States are present. Each has one vote regardless of its size, power or wealth. That gives the body a huge authority. Plus, according to the [UN] Charter, the General Assembly can discuss any matter. So, therefore, I wish to see the General Assembly being a body where the most important issues are being discussed and where we are able to generate answers to the questions that our people are expecting from us.

UN News: What are your hopes for the new session? What do you see as the biggest challenges?

I believe in respect. We might be different, we might have different views, different interests, but we have to respect each other.

Miroslav Lajčák: My hope is that the 72nd session of the General Assembly will be a good one, a productive one that will result in many concrete solutions to the world’s problems. Most pertinent being probably the two of them. First is the prevention of conflict, because I don’t think we can say that we are in control of what’s happening around us. There are too many conflicts, and too few solutions. So, I wish to pay attention to what can we do better to prevent conflict. Because by avoiding conflict, we save human lives and we also save money.

And the second hope is linked to the issue of migration. It’s a global phenomenon. It’s an issue that we are all confronted with, one way or another. We have a task or mandate to prepare the Global Compact on Migration. This will take a lot of time during the 72nd session. But I really hope that we will be able to present a document that is rich in substance, that is credible, and that will be well received by our citizens.

UN News: In your acceptance speech, you spoke about wanting to focus on six priorities [people; peace and prevention; migration; the Sustainable Development Goals (SDGs) and climate action; human rights; and quality]. Given the situation in international affairs now, do you envisage difficulty in keeping your focus on these six priorities?

Miroslav Lajčák: We have to have priorities. At the same time, we have to be flexible and to be able to deal with the issues that we were not foreseeing at the time when we were preparing priorities. So, my six priorities cover all three pillars of the UN work, namely peace and security, development and human rights, and also the ongoing activities. I mentioned already peace and prevention, I mentioned migration. Of course, there is a sustainable development agenda, and the climate agenda where we have to stay focused. There is an agenda of human rights and human dignity. And there is an agenda of a modern UN, which means to support the reforms and also to adopt a budget that will allow us to work also for the future. But as I said, we must not be rigid in sticking to these priorities. Whenever there is a need to address an issue that has emerged and the UN is expected to deal with, we should be ready to do so. 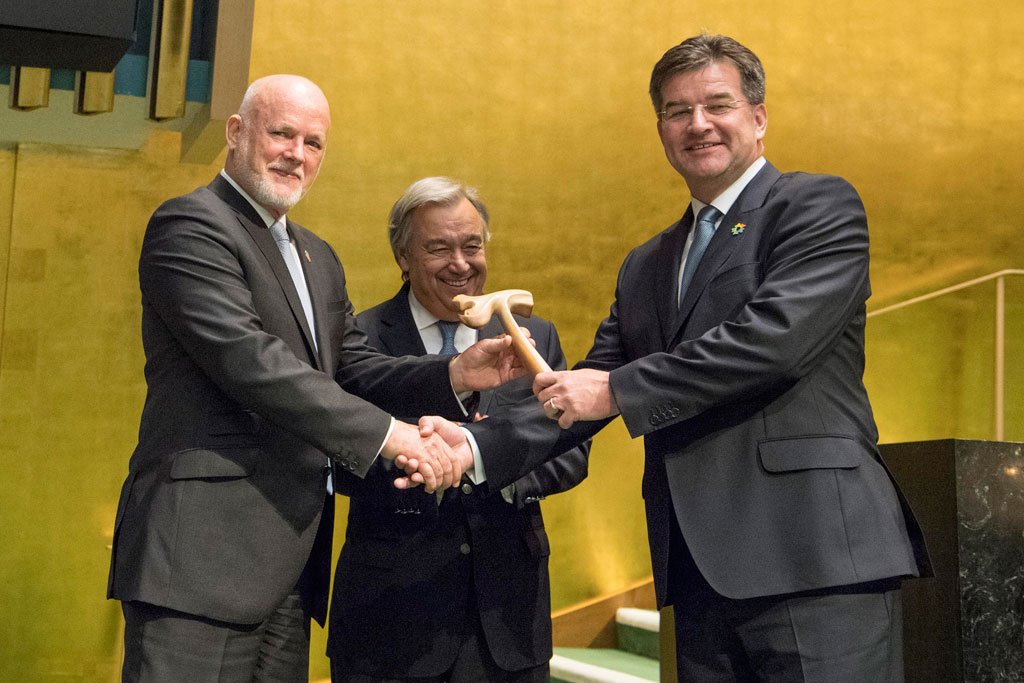 UN News: Your predecessor made oceans and SDGs a key part of his term in office. What topics or themes do you hope to focus on? And why?

Miroslav Lajčák: I’m not bringing into this job an agenda that will be my agenda. My agenda is the UN agenda. The programme is so full. There are so many events that are already mandated and are expected to take place during my mandate, that we can’t easily cover all the priorities. And also out of respect for smaller delegations that have problems to cope with a huge number of meetings, I said, I’m not going to announce additional topics, I would focus on the quality of the meetings that are already mandated, and they are there. I’m comfortable that through those meetings, and those agendas, we will be able to address all the priorities.

UN News: You also spoke about making the General Assembly more effective. How will you do this?

If we disagree, this is not the reason to punish each other, it’s the reason to sit down and try to find a consensus or compromise. This is what I understand as the essence of diplomacy.

Miroslav Lajčák: The most important thing for me is to understand that what we do here is meant to improve the lives of people on this planet. We are not here because of ourselves and we are not here because of fighting over the text of resolutions. But these resolutions serve concrete purposes. So, let us not forget for a minute that we have to focus on people, on their lives and on their concerns. Second, to be representative, as we are or wish to be, we have to be open, we have to communicate with our partners, with the young generations, with media, with civic activists, and NGOs, and with the business community, so that we are really reflecting the hopes, needs and expectations of the world’s public.

UN News: What made you want to seek this position as the President of the General Assembly? 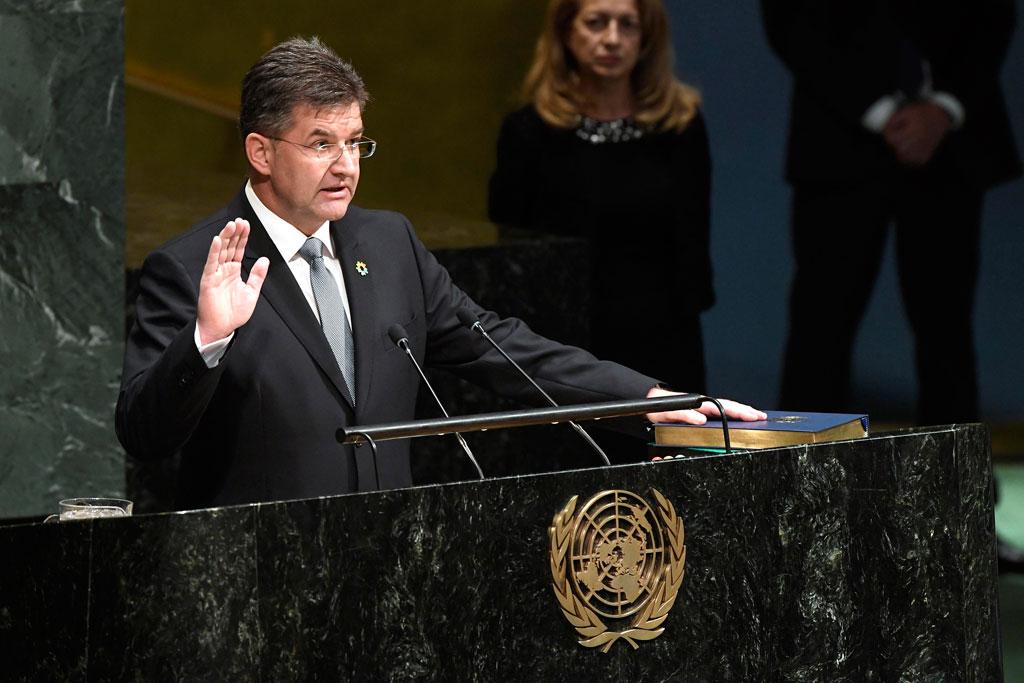 Miroslav Lajčák takes the oath of office as President of the General Assembly. UN Photo/Evan Schneider

UN News: You’ve served your country, the European Union and the international community. How do you expect that your past experiences will facilitate your work here?

Miroslav Lajčák: I do hope that I’ve learned something and understood something over those 30 years. That’s what I am bringing with me into this job. I believe in respect. We might be different, we might have different views, different interests, but we have to respect each other and dialogue. Unfortunately, there is less and less dialogue, and less and less willingness to engage in a dialogue. We are rather exchanging monologues. So, I really want to promote the ability to listen to each other and to hear what we say. And if we disagree, this is not the reason to punish each other, it’s the reason to sit down and try to find a consensus or compromise. This is what I understand as the essence of diplomacy.

I’ve been through difficult missions, particularly in the Balkans. I always tried to listen to the views of the local people, or the views of the region. I never try to impose a solution that I brought with me, but I rather created a solution which was based on the understanding of the local mentality, history, psychology and situation there. And it usually worked. I will try to promote this principle – respect, understanding and dialogue – also into my work here.

UN News: In a year’s time, when you sit here for an exit interview, what do you hope to be able to say as the outgoing President of the General Assembly?

Miroslav Lajčák: I do hope to be able to say that it was a good session of the General Assembly – good because we delivered concrete results for people, and that we were able to overcome our narrow national views and positions in the interest of compromise, which is good for all of us.

The United Nations General Assembly today closed its 71st session with a focus on sustainable development, as outgoing president Peter Thomson handed over the gavel to his successor, Miroslav Lajčák.