The Iraqi Government must ensure that the thousands of women and girls who survived sexual violence by the Islamic State in Iraq and the Levant (ISIL/Da'esh) terrorist fighters receive care, protection and justice, and that children born because of such violence do not face a life of discrimination and abuse, a United Nations report published today says.

“The physical, mental, and emotional injuries inflicted by ISIL are almost beyond comprehension. If victims are to rebuild their lives, and indeed those of their children, they need justice and they need redress,” said UN High Commissioner for Human Rights Zeid Ra'ad Al Hussein in a press release.

Victims have been subjected to rape and sexual assault, forced displacement, abduction, deprivation of liberty, slavery, forced religious conversion, and cruel, inhumane and degrading treatment. Women from the Yazidi and other minority communities have been especially vulnerable to abuses of human rights and violation of international humanitarian law.

The report notes that the Iraqi Government and the Kurdistan Regional Government have taken some positive steps to promote women and children's rights and to address the needs of those who have suffered abuses at the hands of ISIL.

The situation of hundreds of children born to women in ISIL-controlled areas without birth certificates or whose ISIL-issued documents are not accepted by the Government of Iraq or the Kurdistan Regional Government is also deeply troubling, the report says.

Birth registration requires the parents to present proof of marital status and two witnesses must confirm the circumstances of the child's birth – exceedingly difficult in the case of children whose parents may be dead or missing; where the father's identity is not known; where a child has been abandoned due to stigma or for those who live in IDP camps where no civil status offices or courts operate.

“Children who were born in ISIL-controlled areas have the same legal rights as any other Iraqi citizen and the Government must ensure they are protected from marginalisation and abuse, neither exposed to discrimination through references on their birth certificate that they were born out of wedlock or have a father linked to ISIL, nor left unregistered and at risk of statelessness, exploitation and trafficking,” the High Commissioner stressed.

The report makes several recommendations on access to justice; provision of support and care for victims; information and counselling services to reunite separated families, and the importance of birth registration. 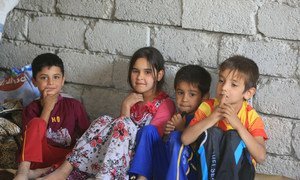 The top United Nations humanitarian official in Iraq has warned against the consequences of displacement as thousands of civilians are expected to flee from Tal Afar and surrounding communities during the Iraqi military operation to retake these areas from the Islamic State in Iraq and the Levant (ISIL/Da'esh) terrorist group.