UNAMA/Jawad Jalali (file)
Aftermath of an explosion in the centre of Kabul, Afghanistan, on the corner of Passport Lane and the Indian Embassy.
17 July 2017

Civilians lives – including those of women and children – continue to be lost at record high levels amid a worsening toll of suicide attacks, the United Nations mission in Afghanistan said today, calling on anti-government forces to stop indiscriminate attacks against civilians as well as on the Government to stop using mortars and rockets in populated areas.

“The human cost of this ugly war in Afghanistan – loss of life, destruction and immense suffering – is too far too high,” said the Special Representative of the Secretary-General for Afghanistan and head of the UN Assistance Mission in Afghanistan (UNAMA), Tadamichi Yamamoto, in a news release today.

“The continued use of indiscriminate, disproportionate and illegal IEDs [improvised explosive devices] by anti-government elements is particularly appalling and must immediately stop.”

According to the UN Mission's 2017 Mid-year Report on Protection of Civilians in Armed Conflict in Afghanistan, 1,662 civilian died (up two per cent on the same period last year) and 3,581 were injured (down one per cent) between 1 January and 30 June 2017.

Many of those casualties occurred in a single attack in Kabul city on 31 May, when a truck bomb killed at least 92 civilians and injured nearly 500. This was the deadliest incident documented by UNAMA since 2001.

Women and children in the country continue be particularly affected. In the report, the UN Mission noted that so far this year, 174 women were confirmed killed and 462 injured (an overall rise of about 23 per cent), reversing a decline documented in 2016.

The statistics in this report, horrifying though they are, can never fully convey the sheer human suffering of the people of AfghanistanUN rights chief Zeid Ra'ad Al Hussein

Child casualties, overall also increased by one per cent, with 436 deaths (a nine per cent increase) and 1,141 injuries, it added, highlighting that the use of pressure-plate IEDs and aerial operations in civilian-populated areas led to substantial increases in both women and child casualties.

Also in the news release, Zeid Ra'ad Al Hussein, the UN High Commissioner for Human Rights underscored that behind each death or injury, there is a broken family, unimaginable trauma and the brutal violation of people's rights.

“Many Afghan civilians are suffering psychological trauma, having lost family and friends, and are living in fear knowing the risks they face as they go about their daily lives. Many more have been forced from their homes and suffered lasting damage to their health, education and livelihoods,” he stated.

“The continuing national tragedy of Afghanistan must not be overlooked.”

The UNAMA report also highlighted that 40 per cent of all civilian casualties during the six-month period were due to anti-government forces using IEDs, such as suicide bombs and pressure-plate devices.

In total, anti-government forces caused the deaths of 1,141 people and injured 2,348. These deaths and injuries represent 67 per cent of the total number of civilian casualties, with 43 per cent attributed to the Taliban, five per cent to Islamic State in Khorasan Province (ISKP), and the rest to unidentified attackers.

Also in the report, the UN Mission noted continued efforts by the Afghan security forces to reduce civilian casualties resulting from ground engagements, which represent the second leading cause of deaths and injuries.

Pro-government forces were responsible for 327 civilian deaths and 618 injuries, a 21 per cent decrease compared with the same period last year, although UNAMA noted a 43 per cent rise in civilian casualties during aerial operations (95 deaths and 137 injuries).

In its recommendations, the report has called on anti-government forces to stop targeting civilians and to enforce directives from the Taliban leadership calling for an end to such attacks. It has also urged the Government to stop using weapons such as mortars and rockets in civilian populated areas, and to disband pro-government militias and similar groups.

In the news release, the UN Mission also noted that the report includes only those incidents that have been confirmed after a thorough verification process, meaning that the actual figures could be higher. 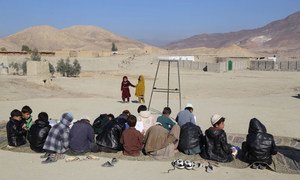