<a href=http://bit.ly/2pCTxjQ>Bilal Sarwary/IRIN</a>
Samar Khel camp, near Jalalabad, where Afghans displaced by war have taken shelter
27 April 2017
Peace and Security

“It is civilians, with increasing numbers of women and children, who far too often bear the brunt of the conflict,” said Tadamichi Yamamoto, the Secretary-General's Special Representative and the head of the UN Assistance Mission in Afghanistan (UNAMA) in a press release. “With the so-called fighting season imminent, I appeal to all parties to take every measure possible to prevent unnecessary and unacceptable harm to Afghan civilians.”

In the first quarter of 2017, UNAMA documented 2,181 civilian casualties – 715 dead and 1,466 injured, a four per cent decrease compared to the same period in 2016. Civilian deaths decreased by two per cent while civilian injuries decreased by five per cent.

It is civilians, with increasing numbers of women and children, who far too often bear the brunt of the conflict

Anti-Government elements caused 62 per cent of civilian casualties, 447 dead and 906 injured for a combined 1,353, reflecting a five per cent increase compared to the same period in 2016.

Civilian casualties from unexploded ordnance increased by one per cent to 203, 50 dead and 153 injured, of which children comprised 81 per cent.

Also in the first quarter, the mission recorded 735 child casualties, 210 dead and 525 injured, a three per cent increase compared to the same period in 2016. 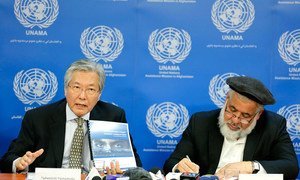 While enormous challenges remain, Afghanistan authorities have made headway in their fight against corruption, according to a United Nations report released today, which also finds that the country is making progress in other areas, such as restoring institutional control over the delivery of public services.