Speaking to reporters in the early hours of Saturday in Geneva, United Nations Special Envoy said that the latest round of the intra-Syrian talks ended with “incremental progress.”

“We made, as we were expecting and hoping, incremental progress. No breakthrough, no breakdown, no one walking out, incremental progress,” Staffan de Mistura said at a press conference, following the conclusion of the 10-15 July round of the UN-facilitated talks aimed at ending six years of war in the Middle East country.

No breakthrough, no breakdown, no one walking out, incremental progress

Referring to a technical consultative mechanism agreed on in the previous round, he said that “in addition to this technical agreement… there has been a generous effort among them (the opposition) to build something they didn't have before, trust, mutual trust.”

“I would not have imagined two months ago that they would have been sitting in such an intensive and constructive way together in confidence,” the envoy said.

He said he intends to reconvene the intra-Syrian talks in early September.

“I have asked the parties to be ready to offer clear, substantive positions on issues across all four baskets, and we hope that we will be at least pushing them to sit in the same room.”

The “four baskets” are: a credible non-sectarian transitional government; a future constitution; early and free parliamentary elections within 18 months; and a united war against terrorism within Syria. 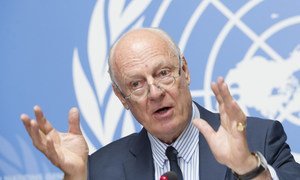 A deal to set up a ceasefire zone in Syria along with other political developments could help boost a new round of talks aimed at ending more than six years of conflict in the country, United Nations Special Envoy Staffan de Mistura said today.