On 14 July 2017, Lilly Singh met with a children’s group, Bal Commando, supporting the sanitation movement in a village close to the city of Harda in Madhya Pradesh State, India. UNICEF supported the rural parts of the district to become open defecation free. Photo/UNICEF/UN071747/Brown

In this role, Ms. Singh, known by her digital alias Superwoman, will use her unique cyber presence to engage children and young people and empower them to speak out about the challenges they face.

“I am honoured to join UNICEF as a Goodwill Ambassador, and to use my voice to support its mission of reaching every child,” she said at a special event today in New Delhi. “The children I have met here are overcoming so many challenges – and they are living proof of what a child can achieve, if given a chance,” she added.

I am honoured to join UNICEF as a Goodwill Ambassador, and to use my voice to support its mission of reaching every child

According to a press release on her appointment, the 28-year-old has gained a huge fan base of over 11 million YouTube subscribers. This year, she released her international and New York Times bestselling book How To Be A Bawse, and was recently cast in HBO's film adaptation of “Fahrenheit 451.” Additionally, she was ranked 1st on the Forbes Magazine Top Influencers List in the entertainment category.

“Lilly Singh is already a Superwoman, helping empower girls around the world – and we are delighted that she will lend her passion and her powerful voice to speak up on behalf of the most vulnerable children,” said UNICEF Deputy Executive Director Justin Forsyth.

“Lilly is a role model to so many young people, especially girls, and we look forward to the role she will play in generating greater discussion – and greater action – around the value of girls in India and everywhere,” said Yasmin Haque, UNICEF's Representative in India.

More than 50 per cent of India's population are below the age of 25 and India is already the second largest market for YouTube, Facebook, and many other video platforms. 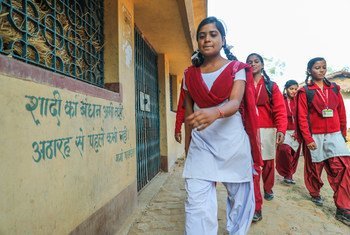 10 July 2017
Girls with higher levels of education are less likely to have an early and unintended pregnancy, the United Nations education agency said today, launching a new technical paper with recommendations for the education sector.