9 July 2017
Speaking to the press in the Ukrainian capital, Kyiv, United Nations Secretary-General António Guterres called on all sides to fully respect the ceasefire and underscored the Organization's support to the country and its people.

“You can be sure that for us this is something that we keep in the agenda. It is not a forgotten situation,” said Mr. Guterres at a press conference, alongside Petro Poroshenko, the President of Ukraine.

“The human rights bodies of the UN are, of course, active in relation to the situation, and, as it is known, the High Commissioner [for human rights] will be providing also his report on the human rights situation in Crimea in due time,” he noted.

He added that the UN is ready to support all efforts, including those of the Normandy Four, the Trilateral Contact Group and the Organization for Security and Co-operation in Europe (OSCE).

In his remarks, the Secretary-General also highlighted the UN's support to humanitarian activities in the country and said that it would enhance its cooperation with the Government and that it will work to overcome any challenges in reaching the populations in distress.

More than 1.7 million people have been displaced in Ukraine since the start of the conflict.

Mr. Guterres also said that UN fully supported the reform process of the Government and that he has closely followed developments in that regard.

“As the President mentioned, we are ready to upscale our cooperation and our presence to support the Government in the reforms that [it] will be promoting,” he added.

Further in his remarks, the Secretary-General expressed appreciation to the cooperation between Ukraine and the UN as well as the country's contributions to the UN peacekeeping efforts and to global peace and security as a member of the Security Council.

“Ukraine has been actively engaged in all processes in relation to both peace and security, sustainable and inclusive development, and human rights, and I want to express my deep appreciation for what has been an exemplary cooperation,” he said.

Also in his remarks, Mr. Guterres recalled his link with the people of Ukraine during his tenure as the UN High Commissioner for Refugees.

“I started to work with them as High Commissioner for Refugees, and I want to say that I deeply feel the suffering of the people and I am deeply committed to do everything I can in order to be able to address their plight,” he stated. 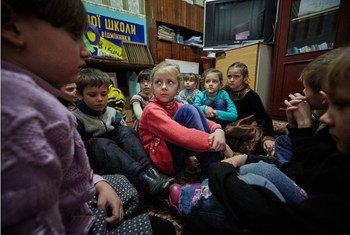 16 June 2017
With the recent escalation of hostilities damaging vital water infrastructure in eastern Ukraine, at least 750,000 children are at imminent risk of being cut off from safe drinking water, the United Nations Children's Fund (UNICEF) warned today.