On the opening day of the Conference on Cyprus, a senior United Nations official expressed hope that the Greek Cypriot and Turkish Cypriot leaders as well as the guarantors – Greece, Turkey and the United Kingdom – have the determination to overcome the challenges and resolve the issues before them.

“This is an historic opportunity to solve a problem that has been there for decades,” Jeffrey Feltman, the Under-Secretary-General for Political Affairs, told reporters after the opening of the Conference, which is being held in the Swiss town of Crans-Montana.

Mr. Feltman is representing Secretary-General António Guterres at the Conference, which the UN chief is expected to attend later in the week.

Speaking alongside Mr. Feltman, the Special Adviser to the Secretary-General on Cyprus, Espen Barth Eide, told the media that the Conference had gotten off to a constructive and good start.

“I am encouraged with what I heard so far,” he said, adding that the “hard work will remain” and that everyone was prepared to hold discussions in larger as well as smaller groups and to “do what is possible” to facilitate an outcome.

“But at the end of the day, of course, it is the responsibility of the Conference participants to go that final mile, to think outside the box, to try out some new ideas so that we finally [leave with] a plan.”

Earlier this month, the Secretary-General held a meeting with the Greek Cypriot leader, Nicos Anastasiades, and the Turkish Cypriot leader, Mustafa Akinci, at UN Headquarters in New York, after which he announced the reconvening of the Conference on Cyprus.

In addition to the Greek Cypriot and Turkish Cypriot leaders and the guarantor powers, the European Union also participated, as an observer, in the Conference. 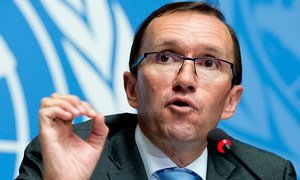 A fresh round of talks on Cyprus will last “as long as it takes,” but there are no guarantees of success, the United Nations negotiator facilitating the process said today.