The United Nations disarmament chief today called for stronger international cooperation to prevent terrorists from accessing and using weapons of mass destruction, warning that technological advances – such as unmanned aerial vehicles, 3-D printers and the Dark Web – make it easier for terrorist groups to effectively use such weapons.

“The possibility of non-State actors, including terrorists, acquiring weapons of mass destruction remains a significant threat to global security, and the international community must step up its efforts to ensure that the disastrous scenario of WMD terrorism is avoided,” Izumi Nakamitsu, the High Representative for Disarmament Affairs, told the Security Council in an open date on the topic.

She cautioned that while globalization fosters new opportunities for economic growth and development, it also allows for greater mobility of materials and technologies, as well as scientific discoveries and personnel with “relevant expertise to use and exploit them with malicious intent.”

Ms. Nakamitsu also underlined the importance of both international dialogue, between governments and industry, as well as greater coordination and information-sharing among security agencies within each country.

When weapons are used, the senior UN official urged the international community to seek accountability.

“The international community must uphold the norms that have been established in this area, and to prosecute those responsible for committing or supporting such acts,” she said.

In addition to dozens of representatives from UN Member States, the Security Council also heard today from Joseph Ballard, Senior Officer from the Office of Strategy and Policy at the Organisation for the Prohibition of Chemical Weapons (OPCW).

The OPCW – which is an independent, autonomous international organization with a membership of 192 member States – has a working relationship with the UN. Its main function is to implement the Chemical Weapons Convention, which entered into force in 1997.

Mr. Ballard echoed Ms. Nakamitsu’s concerns about the dual-use of materials and technologies, and underlined the need for greater collaboration and transparency in ensuring that toxic chemicals do not fall in the wrong hands.

The use of chemical weapons by non-State actors, Mr. Ballard said, “is no longer a threat but a chilling reality.”

Today’s debate in the Security Council focused on practical measures that the 15-member body, Member States and international organisations can adopt to prevent non-State actors from acquiring or using nuclear, chemical and biological weapons.

According to a note from the Security Council ahead of the debate, discussions are anchored by resolution 1540 (2004), which is considered the overarching legal instrument on preventing the proliferation of weapons of mass destruction. Representatives are also discussing aspects of resolution 2325 (2016), which notes the need for more attention to “enforcement measures; measures relating to biological, chemical and nuclear weapons; proliferation finance measures; accounting for and securing related materials; and national export and transhipment controls.” 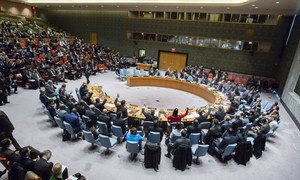 Expressing concern over the threat of terrorism and the risk that non-State actors may acquire or use nuclear, biological or chemical weapons, the United Nations Security Council today called on all countries to establish national controls to prevent proliferation of such weapons as well as their means of delivery.