Two United Nations agencies have voiced 'deep concern' for the safety of hundreds of migrants and refugees – including many children – held captive by smugglers or criminal gangs at an unknown location in Libya after a video showing their abuse was posted on Facebook.

The UN International Organization for Migration (IOM) has confirmed that the videos are authentic.

According to the agency, short video clips have also been sent to families of those held captive, threatening that they will be killed if ransoms (ranging between $8,000-$10,000) are not paid.

“Seeing a Facebook video of innocent migrants and refugees who have been abused and tortured is deeply concerning,” said Mohammed Abdiker, IOM Director of Operations and Emergencies, in a news release.

“The cruelty of the human traffickers preying on vulnerable refugees and migrants in Libya does not seem to have a limit,” added Amin Awad, the Director for the Middle East and North Africa at the Office of the UN High Commissioner for Refugees (UNHCR), calling for their immediate release.

Those seen in the video are from Somalia and Ethiopia but other nationalities could also be present, noted IOM.

It added that migrants and refugees travelling to Libya from the Horn Africa, are particularly vulnerable in the Raybana area on the country's southern border with Sudan, where many are frequently abducted.

The agency also drew attention to the increasing trend of abuse of digital and social media platforms by smugglers or criminal gangs and called on such firms to be more vigilant.

“This is a global problem where a smuggler or a criminal gang can easily use digital platforms to advertise their services, entice vulnerable people on the move and then exploit them and their families,” said IOM's Mr. Abdiker.

Social media, including Facebook, has a duty to better police content on its channels […] We are not accusing Facebook of complicity [but emphasizing] that these channels are being abused by criminals – Leonard Doyle, chief spokesperson for IOM in Geneva

“It is high time that social media and tech companies recognize the extreme harm that is occurring because of their failure to monitor and react to situations of grave human rights abuses […] that are being shared through their channels,” he added.

Also today, the head of IOM operations in Libya, Othman Belbeisi, said that the agency is working closely with all partners in trying to locate the migrants.

“[We are] supporting Libyan efforts in the fight against the smuggling networks and we are very concerned about the current situation,” noted Mr. Belbeisi, adding that IOM would continue to use its staff in the region – in coordination with the authorities – to assist in tracing and potentially aiding in the rescue of these victims.

Some of the captives in the videos have been missing for up to six years, according to their families in Somalia, noted IOM.

The videos, made by a journalist based in Turkey (who recorded the call he received from the criminal gang, and posted it on Facebook on 9 June) show hundreds of emaciated and abused male migrants and refugees sitting on the floor in a crowded space.

They said that been beaten and tortured.

Some of them also reported that their teeth have been removed, their arms broken, they have not been fed, and that women and girls have been put in different cells, where these men fear they are being abused both sexually and physically.

“I have being here one year. I am beaten every day. I swear I do not eat food. My body is bruised from beating,” said one of the captives in the video. “If you have seen the life here you wouldn't stay this world any more. I didn't eat the last four days but the biggest problem is beating here. They don't want to release me.”

IOM noted that throughout the video there are exchanges between the journalist and the person moderating on site in Libya.

In one instance, he introduces the journalist to a young visibly starving man with a large concrete block weighing down on his back, as punishment for his family not paying his ransom.

“I was asked for $8,000,” said the young man, when asked by journalist why the criminal gang were punishing him. “They broke my teeth. They broke my hand. I have being here 11 months […] This stone has been put on me for the last three days. It's really painful.”

“I was here one year,” said another captive on the video (from Ethiopia), pleading with the journalist for help.

“We want help. My brother, my brother, we are dead! We are beaten 24 hours a day, brother I am begging you! Brother I beg you, do whatever you can do. I can't sleep, my chest hurts so much because they beat me with big pieces of steel every hour. They put us out in the sun. They do not give us food for days. Brother, we want you can take us back to our country!”

UN calls for resumption of Mediterranean rescues, after 43 die in Libya shipwreck 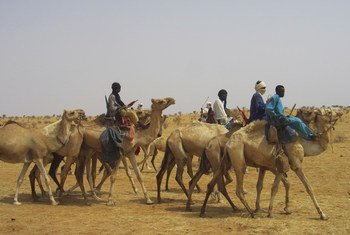 2 June 2017
Warning that smugglers may now be “broadening” a death trap for migrants and refugees that could stretch from the Mediterranean to the vast Sahara Desert, the United Nations refugee agency has reiterated its call for safe pathways so that those in desperate need of international protection do not lose their lives.