Warning that smugglers may now be “broadening” a death trap for migrants and refugees that could stretch from the Mediterranean to the vast Sahara Desert, the United Nations refugee agency has reiterated its call for safe pathways so that those in desperate need of international protection do not lose their lives.

The alarm has been raised by the Office of the UN High Commissioner for Refugees (UNHCR) as some 44 migrants and refugees – including women and children – are reported to have succumbed to extreme dehydration when the truck they were travelling in (to Libya) broke down in the desert in northern Niger, exposing them to extreme heat and lack of drinking water.

Only six could be saved.

“It is quite clear that human smugglers will go to any extent to exploit desperate refugees and migrants,” said the UN agency in a news release today.

“These shocking deaths are part of the bigger picture of exploitation as smugglers broaden the death trap from the Mediterranean to the Sahara Desert.”

Further, according to the UN International Organization for Migration (IOM), the Niger to Libya route is the one most sub-Saharan African migrants take when trying to reach Europe via the Mediterranean Sea.

Each week, thousands of desperate migrants are crammed into pick-up trucks for the days-long ride, often with only enough room for a few litres of water attempting to cross one of most inhospitable and deadliest places on the planet.

“The migrants are often lied to and cheated on their way [and] smugglers usually run away with their money, [leaving them] in the middle of nowhere, in a country they don’t know, trying to gain enough money to either continue the route or go back home,” said Guiseppe Loprete, the head of IOM operations in Niger.

Both IOM and UNHCR have been working to support refugees and migrants in the region, as well as warning them of the perils of the desert and sea journeys but operations remain constrained in the want of additional resources.

The UN refugee agency is currently in need of $75.5 million to meet the increased humanitarian and protection needs of people in Libya – including those internally displaced, host communities, as well as refugees and asylum seekers.

The appeal includes protection monitoring and interventions, as well as advocacy on issues related to respect for human rights, access to basic services, asylum procedures and freedom of movement.

Additional resources are also required in Niger, Burkina Faso, Mali and Chad to help prevent and respond to risks associated with such deadly journeys.

According to estimates, so far this year, the perilous Mediterranean crossing has claimed more than 1,700 lives.

“This latest tragedy was a grim reminder that probably more migrants die in the Sahara desert than in the Mediterranean, but due to the inhospitable nature of the region, it was virtually impossible to know the exact number,” said Mr. Loprete. 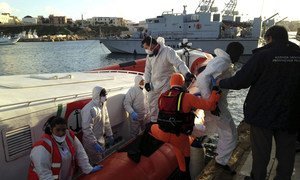 Against the backdrop of more than 1,700 people having perished this year while undertaking perilous crossings across central Mediterranean Sea to reach mainland Europe, the United Nations refugee agency has appealed for “credible alternatives” to ensure accessible and safe ways for people in need of international protection to reach the continent.