UNHCR/Pumla Rulashe
Congolese women and children arrive at a border point in Chissanda, Lunda Norte, Angola after fleeing militia attacks in Kasai Province, Democratic Republic of the Congo. UNHCR workers were waiting to register them and organise onward transportation to camps or settlements.
12 May 2017

With violence and insecurity continuing to force people to flee Democratic Republic of Congo’s Kasai region and seek refuge in neighbouring Angola, the United Nations refugee agency has called for a suitable place to shelter them as well as additional resources to support those in urgent need.

According to the Office of the UN High Commissioner for Refugees (UNHCR), more than 20,000 new arrivals have been recorded since early April, with nearly 3,000 over the past few days.

“[We] continue provide food and relief items to those arriving [and our] partners are pitching tents and distributing plastic sheeting to provide adequate shelter, prioritizing the most vulnerable people,” Andrej Mahecic, a spokesperson for the UN agency, told journalists today at a regular media briefing at UN Office at Geneva (UNOG).

UNHCR is also supporting Angolan authorities identify a suitable site to relocate refugees from temporary reception centres that have become overcrowded as the number of arrivals increase.

However, there are particular concerns for women and girls – who form about 70 per cent of new arrivals – as well as for a number of children who arrived unaccompanied and separated.

Furthermore, many people the recent arrivals included those with severe wounds and burn injuries, who had been transferred to a local hospital to receive urgent medical attention. About 70 are receiving treatment at local hospitals.

However, detailed information on the injuries was difficult to ascertain as the situation was unfolding in a very remote area, the north-eastern part of Angola, with people fleeing from the Kasai region also from a very remote area, explained Mr. Mahecic.

Also in its response to the situation, the UN agency has airlifted first-aid kits, solar lanterns, tents, and plastic sheets and rolls.

However, as the influx continues, more resources are needed to cope with the demand. In particular, UNHCR has made an appeal for $6.5 million to provide immediate lifesaving assistance, including food, nutrition, health and relief items for refugees. 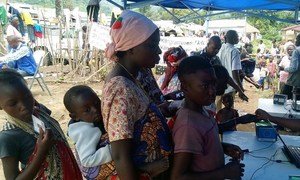 Keep interests of people above all else, UN Security Council urges political actors in DR Congo

Voicing concern over challenges to the implementation of last year's political agreement in the Democratic Republic of the Congo (DRC) and deteriorating humanitarian and security situation, the United Nations Security Council has urged all stakeholders to redouble their efforts to resolve the problems faced by the country.