10 May 2017
Harmful fishing subsidies that contribute to overfishing are estimated to be as high as $35 billion, fisheries experts from the United Nations trade and development agency today said, highlighting one of the key issues that will be debated at next month's Ocean Conference.

“If you consider that the total export of fish and seafood products is $146 billion, we are talking about that of each $5 in fish products, $1 is subsidized,” David Vivas of the UN Conference on Trade and Development (UNCTAD) told reporters in Geneva.

“So it's not a small amount. People are paying very expensively for a fish. They pay it by the dish and with their taxes,” continued Mr. Vivas, a Legal Affairs Officer in UNCTAD's Trade, Environment, Climate Change and Sustainable Development Branch.

This financial motivation creates “a race to the bottom” as fleets compete against each other to harvest increasing amounts of fish – at a time when seafood is already a scarce resource.

The subsidies “create incentives to deplete resources faster than if there weren't the subsidies,” Mr. Vivas said.

The international community is harvesting fish at unsustainable biological levels, according to UNCTAD. The Mediterranean Sea is about 70 per cent exploited; the Black Sea 90 per cent.

Roughly 56 per cent of all fish products come from wild harvest, with the remaining amount farmed, according to figures cited by the UN.

“The demand remains quite strong, mainly from the Asian region. Hence countries are not only going to NY to consider, issuing a political signal,” said Lucas Assunçao in reference to The Ocean Conference, “they are very concerned about this considerable market.”

It involves requesting countries to provide information on what subsidies they provide and prohibiting those that contribute to overfishing, as well as potentially giving differential treatment to developing countries.

UNCTAD is working towards a multilateral fisheries agreement that will be discussed at The Ocean Conference in New York in early June, and finalized at the World Trade Organization's (WTO) Ministerial Conference in Buenos Aires this December.

The idea of such an agreement has support from a number of countries and regional blocs, including the African, Caribbean, and Pacific Group (ACP), the European Union, and Pakistan.

In addition to fishery subsidies, the UN trade agency is focusing in illegal, unregulated and unreported (IUU) fishing, and access to markets.

“Not all countries participate equally,” Mr. Assunçao said of the nearly $150 billion market for fish and marine products. “[The oceans are] a global common good that is not benefitting all countries that have coasts in equitable ways.”

Some Governments have said that they will use The Ocean Conference as an opportunity to seek access to bigger markets. The issue is of particular concern for Pacific and Caribbean island states where processing and transporting goods is often more expensive.

The main areas of work at the Ocean Conference will be a political call to action, a segment on partnership dialogues and voluntary commitments. 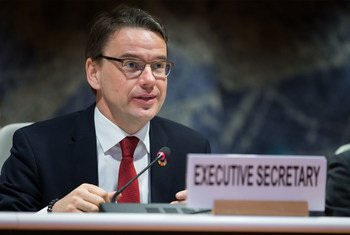 The United Nations Economic Commission for Europe (UNECE) is celebrating 70 years of bringing countries across the continent together to cooperate on a wide range of issues, including trade, transport, sustainable development and food safety, which impact the daily lives of its citizens.