The United Nations Economic Commission for Europe (UNECE) is celebrating 70 years of bringing countries across the continent together to cooperate on a wide range of issues, including trade, transport, sustainable development and food safety, which impact the daily lives of its citizens.

"Throughout its 70 years, UNECE has been connecting countries, driving progress, really impacting the lives of citizens throughout the region," Executive Secretary Christian Friis Bach told UN News in an interview in the lead up to the Commission's sixty-seventh session, which begins in Geneva on 26 April.

"And it has been done quietly; a little bit under the radar," noted Mr. Bach, who previously served as the Minister of Development Cooperation in Denmark.

One of five UN regional commissions set up by the UN Economic and Social Council (ECOSOC), the UNECE aims to promote economic integration throughout Europe through the definitions of norms, standards and conventions enhancing the lives of its people. It includes 56 Member States in Europe, North America and Asia.

For Mr. Bach, who has been leading the commission since July 2014, the UNECE is probably one of the UN organizations that people are most in contact with every single day of their lives. "When people get up in the morning, the fresh food or vegetables they eat are traded according to the agricultural standards in UNECE. When they are driving, the road signs and signals are defined and negotiated in UNECE," explained Mr. Bach.

He went on to note that every single company is in contact with UNECE on a daily basis thanks to its many trade facilitation standards and norms, whether it uses a coding scheme when shipping a package or uses electronic business standards when electronically trading.

"So citizens throughout our region are in contact with UNECE from when they wake up to when they go to bed and it positively impacts their lives," said Mr. Bach.

Take for example the target of SDGs on halving the number of deaths from road crashes. Our convention on road safety helps countries to have safer roads, and better signs and signals Christian Friis Bach

Helping countries to implement the SDGs and the Paris Agreement

UNECE has established hundreds of norms, standards and conventions that help countries to implement all 17 Sustainable Development Goals (SDGs). "Take for example the target of SDGs on halving the number of deaths from road crashes. Our convention on road safety helps countries to have safer roads, and better signs and signals," said Mr. Bach. "The vehicle regulations that are negotiated in UNECE make vehicles safer from everything like seatbelts to electronic stability controls."

Climate change is another crucial area where UNECE is heavily involved. Over two thirds of the Commission's Member States have ratified the Paris Agreement on climate change which entered into force in November 2016. From energy efficiency standards and regulations for cleaner cars to the promotion of more sustainable mobility such as cycling and walking, the Commission has a number of activities to help countries implement the Paris Agreement.

UNECE has, for example, recently established energy efficiency standards for buildings. "This is a huge issue in our region where the energy consumption of the buildings is too high," said Mr. Bach.

"And by this new work on energy efficiency we can help our countries to have more energy-efficient buildings, save on energy and implement the Paris Agreement," he added, while also underlining UNECE's engagement in the transition to a low-carbon economy and sustainable energy for all. 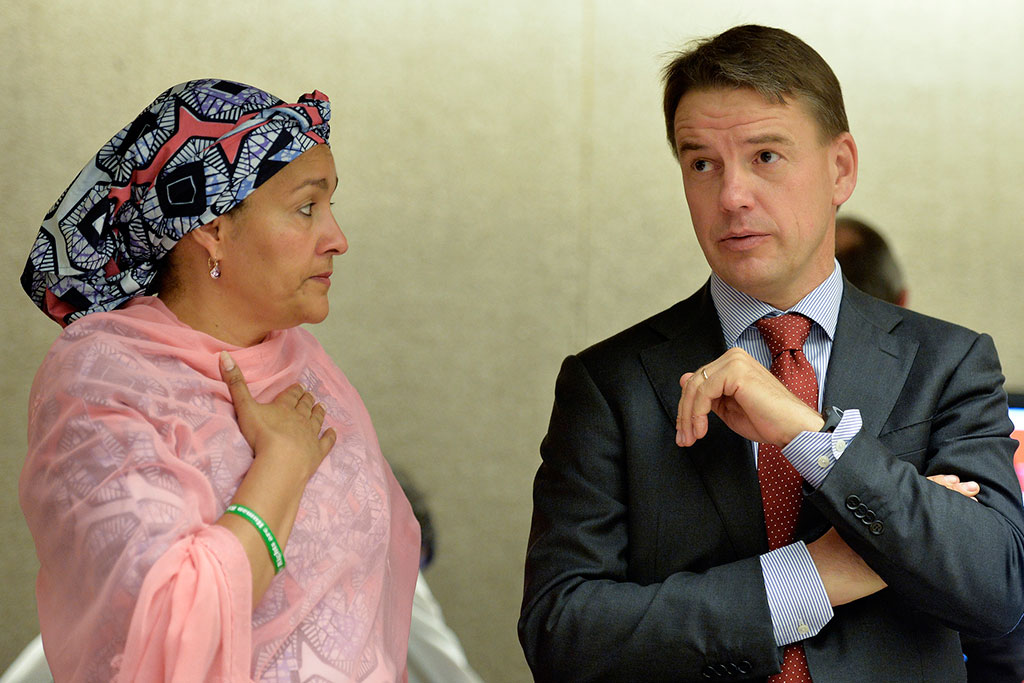 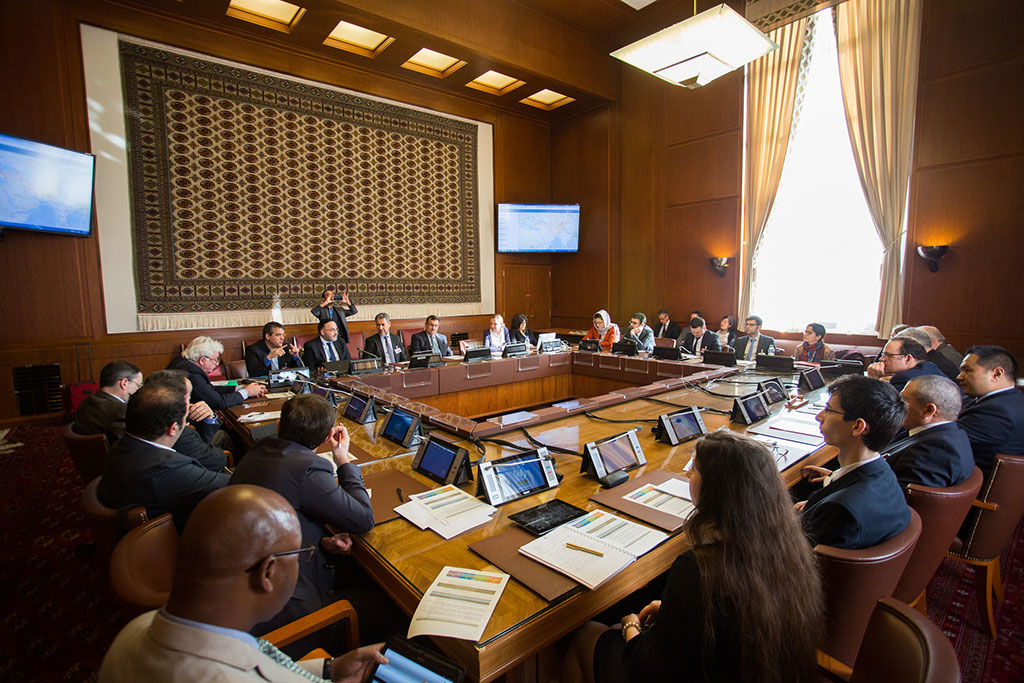 The UNECE Inland Transport Committee (ITC) meets to discuss European transport conventions. Over the last 70 years, together with its subsidiary bodies, the ITC has provided a pan-European forum, where UNECE member countries come together. UNECE/Pierre Albouy 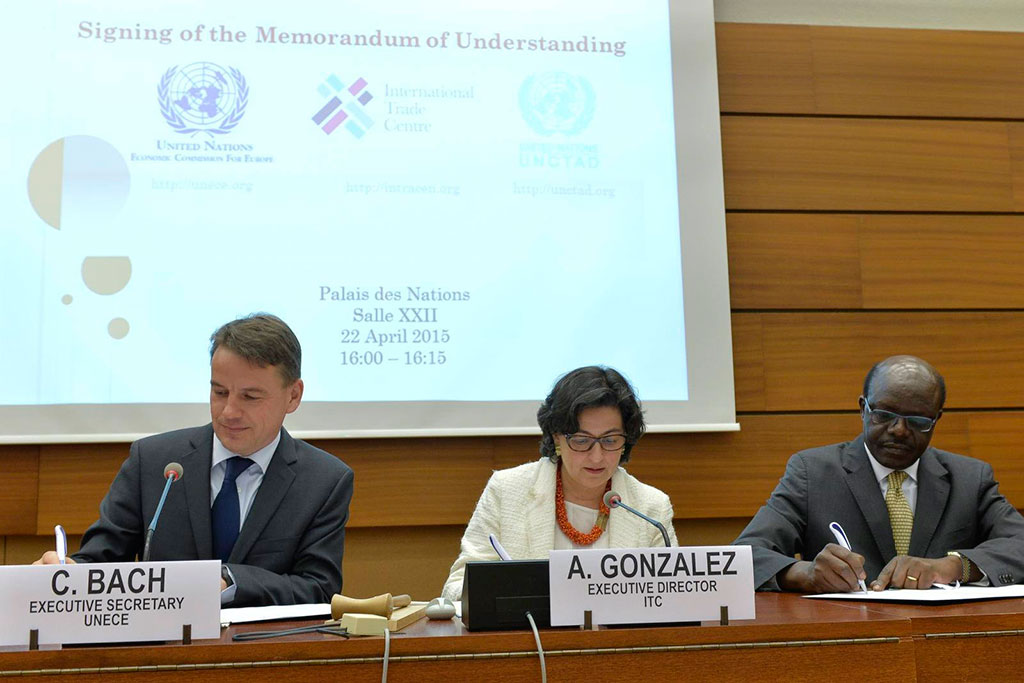 Mr. Bach (left), Arancha González (centre), Executive Director of ITC, and Mukhisa Kituyi (right), Secretary-General of UNCTAD, during the signing of the Memorandum of Understanding between their three bodies. UN Photo/Jean-Marc Ferré 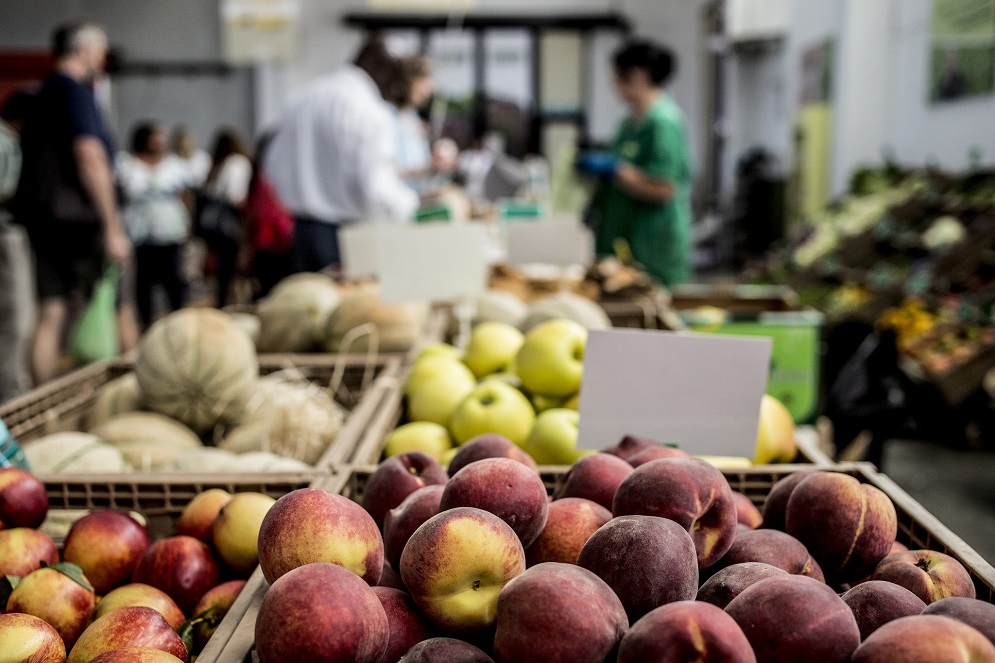 A food stall at the Orto Sole cooperative farm in Fiumicino and Torrimpietra, Italy. Fresh foods and vegetables eaten by Europeans are traded according to the agricultural standards in the UNECE region. The standards encourage high-quality production, improve profitability and protect consumer interests. Photo: FAO/Alessandra Benedetti 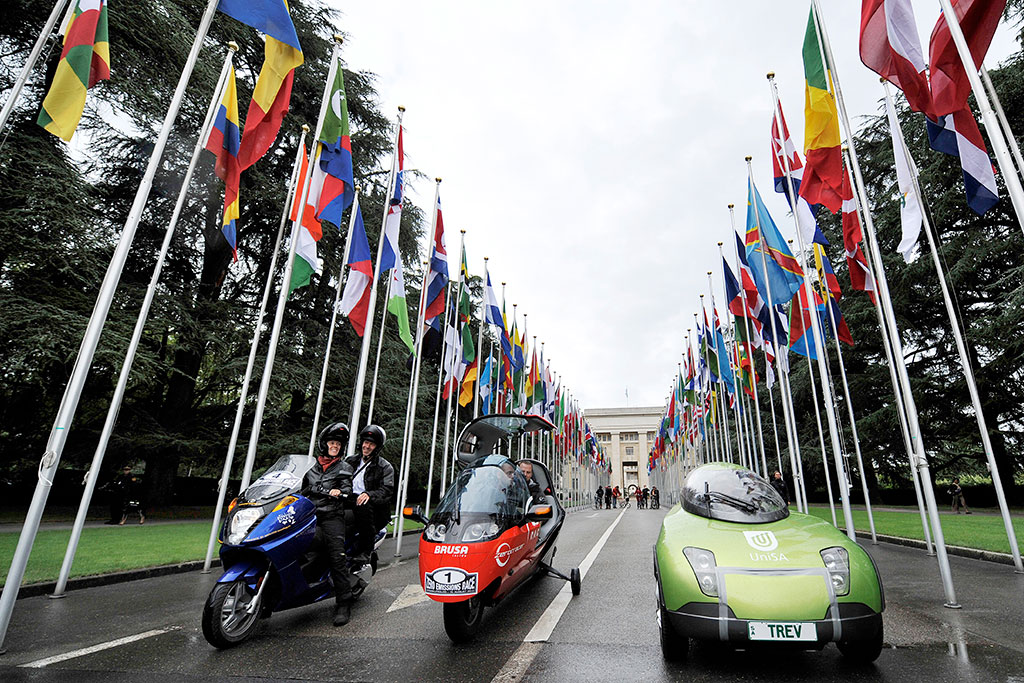 Electric cars line up at the official start of the Zero Emissions Race outside the UN Office at Geneva (UNOG). These vehicles are fuelled by renewable energy such as solar, wind, wave and geothermal. UNECE promotes energy efficiency standards and regulations for cleaner vehicles. UN Photo/Jean-Marc Ferré 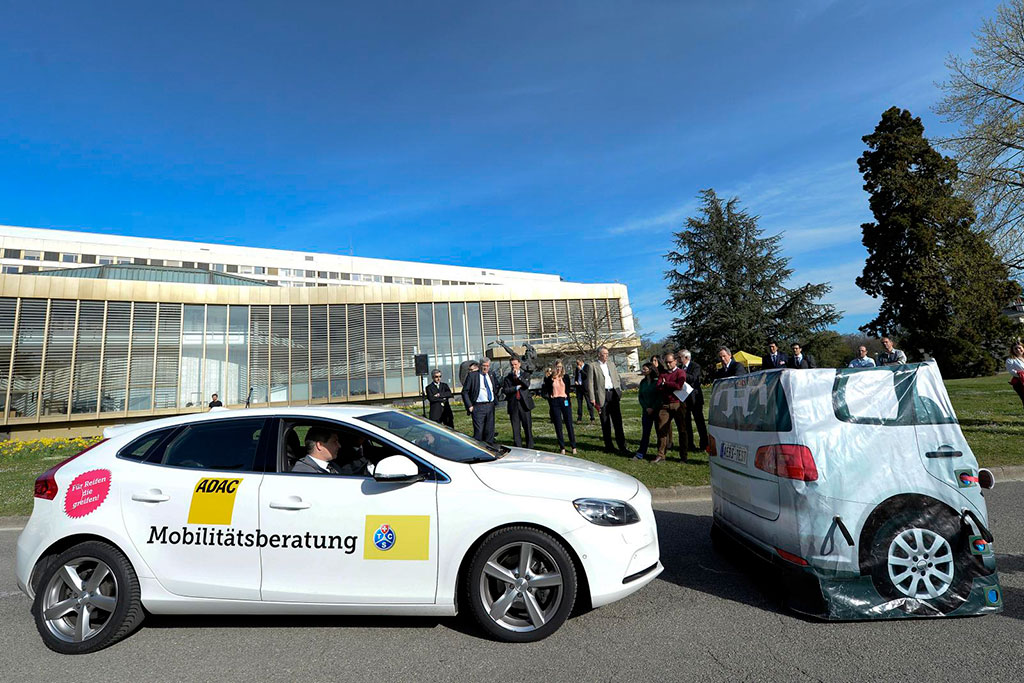 During the UNECE’s 66th session, Mr. Bach test drives a car that is equipped with Autonomous Emergency Braking. His car comes to a full automatic stop thanks to the automatic breaking system. UNECE recently paved the way for automated driving by updating the 1968 Vienna Convention on Road Traffic. UN Photo/Jean-Marc Ferré 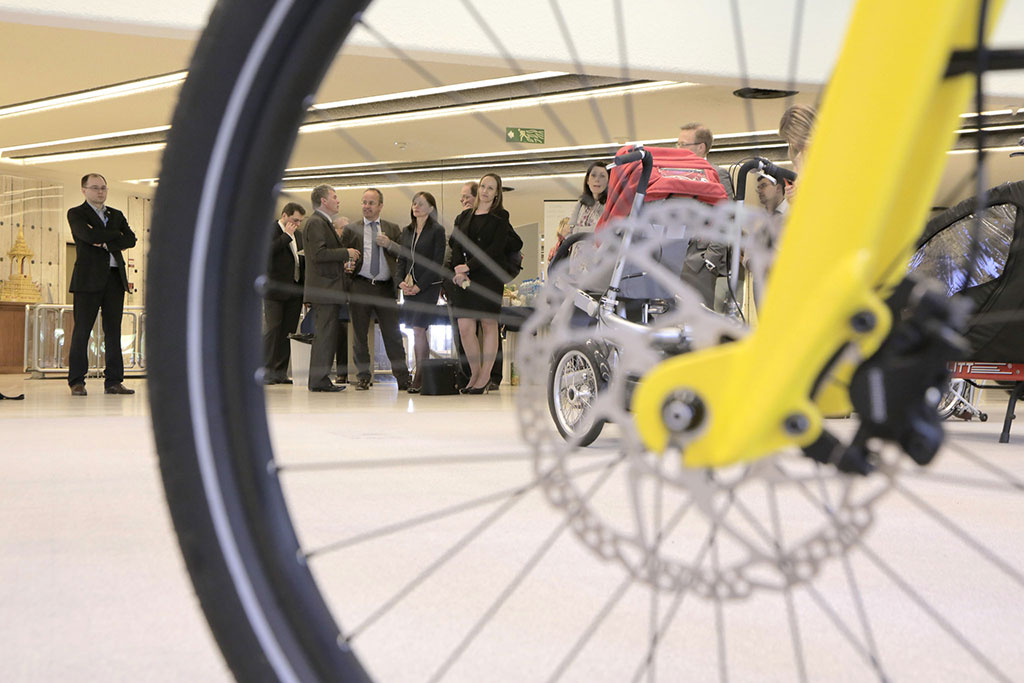 During the UNECE’s 66th session, the Commission organized an event for partnership on cycling. UNECE is fully engaged in the transition to a fossil-free economy that includes more sustainable mobility such as cycling and walking. Recent UNECE-backed research revealed that if 56 major cities across Europe were to replicate Copenhagen’s share of cycling as a mode of transport, an estimated 435,000 cycling-related jobs could be created. Photo: UNECE 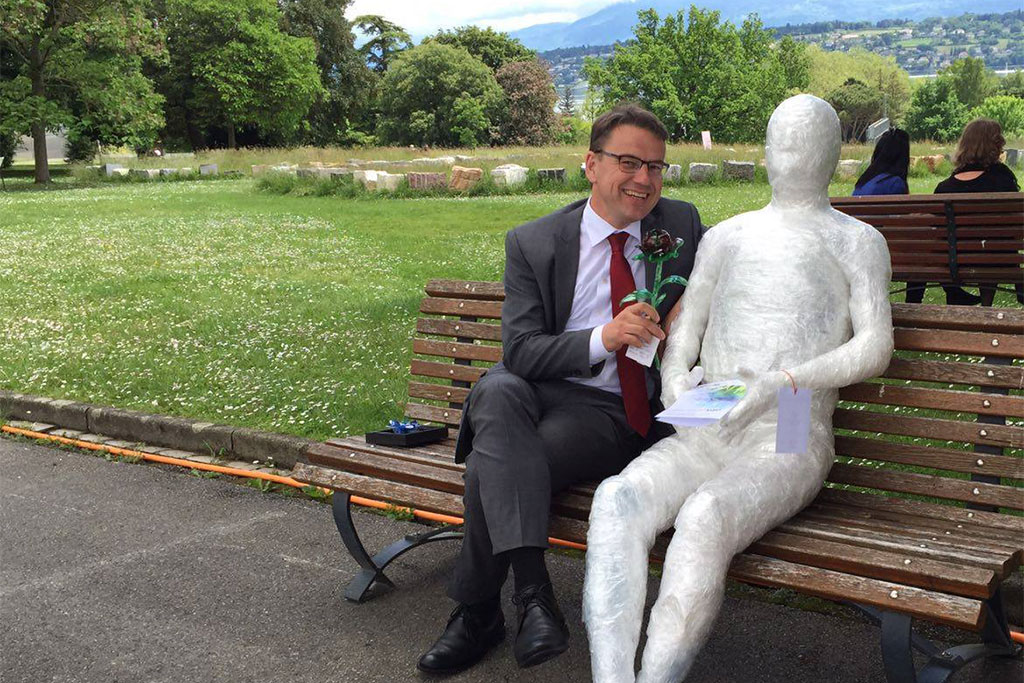 On the occasion of World Environment Day, Mr. Bach sits next to Sophia – a figure made solely of recycled plastic bottles – to raise awareness of the need for a greener environment. Photo: UNECE

Maximizing synergies with other UN organizations

Since its creation, UNECE has been headquartered in Geneva – which has been a boon for the Commission, according to the Executive Secretary. “Geneva is the Silicon Valley of practical international cooperation,” said Mr. Bach. “We have so many synergies here, being so close to so many strong UN organizations.”

Throughout his mandate, Mr. Bach has worked towards strengthening the UNECE’s partnerships and cooperation with the many international organizations that make up what is dubbed ‘International Geneva,’ including working closely with the World Health Organization (WHO) on road safety and with UN Conference on Trade and Development (UNCTAD) and International Trade Center (ITC) on trade facilitation agreements, among others.

Putting differences aside and focusing on concrete cooperation

Although divisions and tensions exist in Europe, Mr. Bach remained optimistic about UNECE's work and the future. "UNECE has proven throughout its 70 years that even in the most difficult times, we could get countries together, put some of … the high politics aside and focus on concrete practical cooperation that is going to benefit citizens," he said.

He recalled, for instance, that the largest transport convention was framed and formed during the very difficult years of the Cold War. "In UNECE, countries came together, put their differences aside and said: let's get the road connected. We have to make sure we have efficient railways. We have to make sure we can cooperate on water, have clean air," said Mr. Bach.

"This was done regardless of the tensions and conflicts and that for me is the strength, legacy and beauty of UNECE and we still have it."

Mr. Bach is aware of the current difficulties facing Europe and believes that countries must get back on the pathway for economic integration and cooperation throughout the continent.

"This is our historical mission. This why UNECE was established," he stated. "To ensure economic integration and cooperation, to maintain peace in Europe, and this mandate is today as relevant as ever."

Mr. Bach will pass on UNECE's leadership to Olga Algayerova of Slovakia in June 2017.

An overview of 70 years of United Nations Economic Commission for Europe. Credit: UNECE
♦ Receive daily updates directly in your inbox - Subscribe here to a topic.
♦ Download the UN News app for your iOS or Android devices.
sustainable development goals|trade

Air pollution, climate change, unhealthy lifestyles and disconnection between people and the environment are increasingly affecting human health in the pan-European region, according to the latest report by the UN environment agency and the UN economic commission in Europe.