UN Photo/Martine Perret
Plastic bottles and garbage waste from a nearby village wash on the shores of a river and then spill into the sea.
27 April 2017
SDGs

There will be more plastic than fish in the world’s oceans by 2050 unless people stop using single-use plastic items such as plastic bags and plastic bottles, according to figures cited by the United Nations.

"Plastic pollution is surfing onto Indonesian beaches, settling onto the ocean floor at the North Pole, and rising through the food chain onto our dinner tables," the agency known as UN Environment Programme (UNEP) has said.

"According to one estimate, 99 per cent of all seabirds will have ingested plastic by mid-century," Petter Malvik, UN Environment Programme's Communications Officer, told UN News.

United Nations Environment Programme warns for the consequences of polluting our ocean with plastic and says that over 8 million tons of plastic end up in oceans each year. The UN will convene the Ocean Conference in June to spur international action to safeguard oceans, seas and marine resources. Credit: UN News

Earlier this year, the UN declared war on ocean plastic. Launched at the Economist World Ocean Summit in Bali, the #CleanSeas campaign urges governments to pass plastic reduction policies, targets industries to minimize plastic packaging and redesign products, and urges people to change their own habits.

Indonesia has committed to slashing its marine litter by 70 per cent by 2025; Uruguay will tax single-use plastic bags this year; and Kenya has agreed to eliminate them entirely.

"The Clean Seas campaign has already achieved important wins for our oceans, but the job is far from done. By 2022, we aim to achieve a global ban on microbeads in personal care and cosmetic products and a drastic reduction in the production and use of single- use plastic," said Mr. Malvik.

Microbeads are tiny pieces of plastic used in, among other things, some exfoliating products and toothpaste. They are listed in the ingredients as polyethylene or polypropylene. 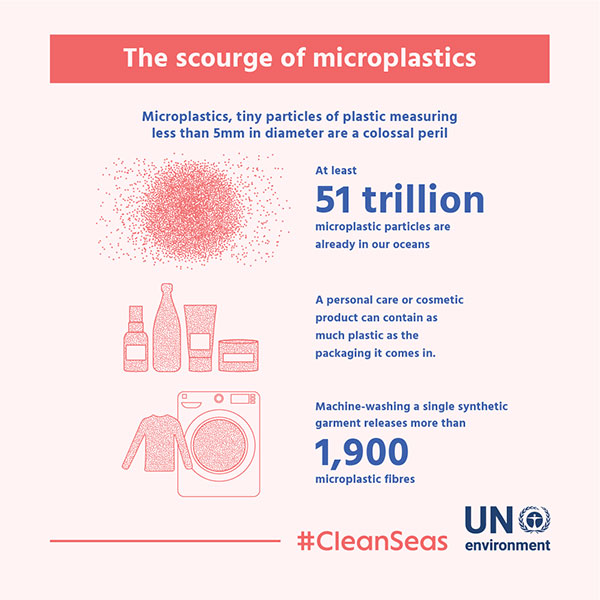 Given the amount of plastic found today in oceans, much of marine life carries plastic that either entered them directly or by eating smaller marine creatures.

"These microplastics often carry toxic contaminants and pose a real risk to food security and human health if they enter the human food chain via the fish that we eat," Petri Suuronen, Fishery Industry Officer at the UN Food and Agriculture Organization (FAO), told UN News.

"With an estimated 9.7 billion people to be fed by 2050, the threat of fish stocks contaminated with microplastics and their associated toxins is clear," Mr. Suuronen added.

In addition to dangers to humans, microplastics are a threat for fish and birds that mistake them as food and starve to death.

Microplastics are made one of two ways. Either they are manufactured – not only as microbeads, but even as microfibers that wash out of synthetic clothes during laundry – or they are created when waves and sunlight break down larger plastic pieces.

One source of microplastics is abandoned, lost or discarded fishing gear.

A 2009 FAO report estimated there are 640,000 tons of abandoned fishing nets on the ocean floor throughout the world. Much of it continuing to trap marine animals in a practice referred to as "ghost fishing." 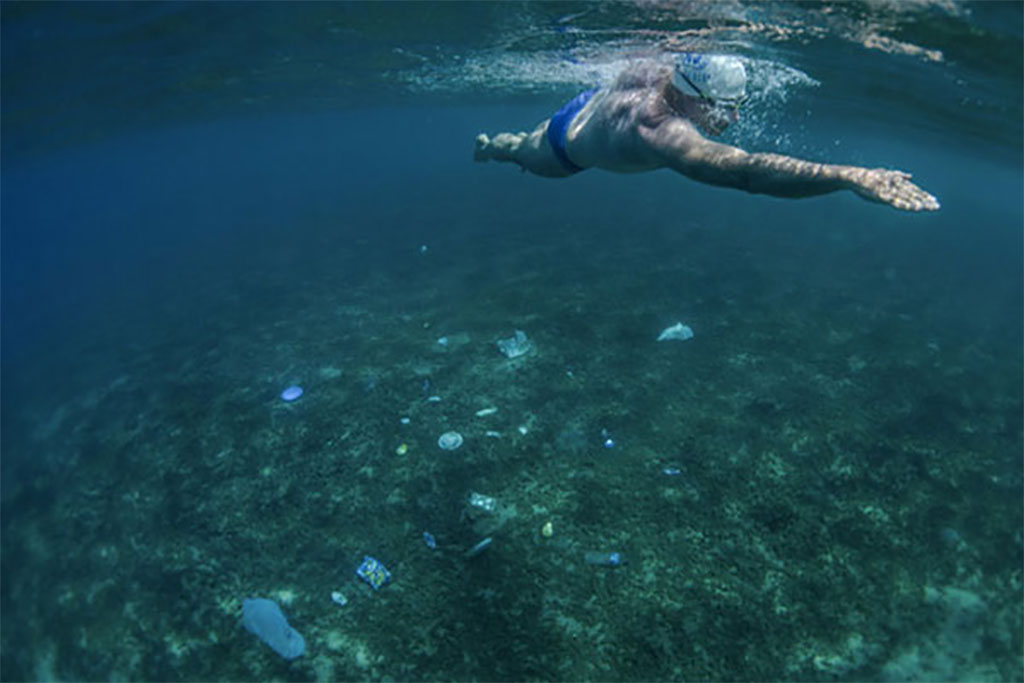 UNEP Patron for Oceans, Lewis Pugh, is swimming the Seven Seas to urge policy makers to protect at least 10 per cent of the world's seas. In the Arabian Sea off Oman, the seabed was a rubbish dump. No fish. No coral. Just tyres, plastic packets, bottles, cans. Photo: UNEP

"Fishing gear can persist for decades in the oceans, entangling wildlife and polluting marine ecosystems as it breaks down into smaller and smaller particles," said Mr. Suuronen.

Aside from its harmful effects, discarded plastic has economic drawbacks. Plastic packaging material with a value of at least $80 billion is lost each year, according to a report by the World Economic Forum and the Ellen MacArthur Foundation, cited by the UN.

The report also notes that if this trend continues, by 2050, oceans will contain more plastic than fish by weight.

Solving the issue of plastic pollution will require international agreements. 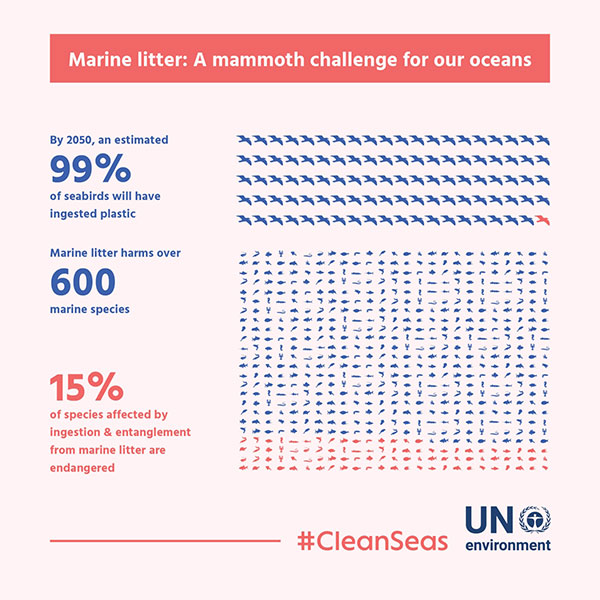 During the week of 5 June, Member States and civil society representatives will gather at UN Headquarters in New York for the Ocean Conference. Among its expected outcomes is a Call to Action – a global declaration that will set the course toward a more sustainable future for the world's oceans and seas.

The focus of the conference is Sustainable Development Goal 14, which aims to alleviate poverty and inequality, while preserving the earth. ‘SDG 14' calls for efforts to conserve and sustainably use the oceans, seas and marine resources.

"Humanity is only just waking up to the extent to which it is harming itself and the planetary environment through the plague-proportions of plastic it is dumping into the ocean," said Peter Thomson, President of the UN General Assembly.

"The Ocean Conference must take the first steps to reverse the growing curse of marine plastic pollution. We have all played a part in this problem; we must all work on the solutions."

♦ Receive daily updates directly in your inbox - Subscribe here to a topic.
♦ Download the UN News app for your iOS or Android devices.
oceans|SDG 14

Visiting a traditional fishing community in Senegal, the President of the United Nations General Assembly has called on the countries in the region to prioritize conserving and sustainably managing their marine resources.