The Ocean Cleanup/Pierre Augier
The Ocean Cleanup vessel is aiming to clean up plastic pollution in the Pacific Ocean. It left San Francisco on its first voyage on 8 September 2019.

A trial run of an innovative system designed to clean up the world’s seas and oceans, founded by UN Environment Programme (UNEP)  “Champion of the Earth” laureate Boyan Slat, has set off from San Francisco, in a bid to begin the removal of the so-called Great Pacific Garbage Patch.

This huge mass of marine debris, situated in the North Pacific Ocean, halfway between the Californian coast and Hawaii, is estimated by Mr. Slat’s Ocean Cleanup organization to measure 1.6 million square kilometres – 3 times the size of France – and contain 1.8 trillion pieces of plastic. That amounts to 250 pieces for every person on the planet.

The long-awaited launch of the first deployable model of the marine litter collection system, named “System 001”, took place on Saturday at the Golden Gate Bridge, following four years of research and adjustments.

It consists of a 600-meter-long floater that sits at the surface of the water, and a tapered 3-meter-deep skirt attached below. 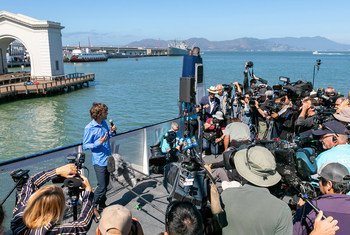 The system is carried by the ocean’s currents and waves, passively catching plastic debris along the way.

Ocean Cleanup’s research indicates that a scaled-up fleet of 60 such systems could eventually clean up 50 per cent of the patch in the next five years.

The trials are taking place 240 nautical miles into the Pacific Ocean. Once they are completed, the devices will be sent the remaining 1,000 nautical miles out to the Great Pacific Garbage Patch.

Mr. Slat, founded Ocean Cleanup when he was just 18, and he was named a “Champion of the Earth” by UN Environment the following year, in recognition of his quest to find a solution to the ever-growing global problem of plastic debris in our oceans.

Champions of the Earth is the UN’s highest environmental honour, celebrating outstanding figures from the public and private sectors and from civil society whose actions have had a transformative positive impact on the environment.

Every year, at least 8 million tonnes of plastic leaks into our oceans. Besides washing up on our beaches and shorelines, plastic marine debris accumulates in five garbage patches around the world: the Great Pacific Garbage Patch is the largest. 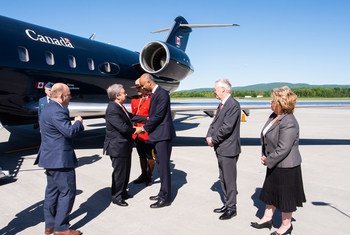 ‘We face a global emergency’ over oceans: UN chief sounds the alarm at G7 Summit event

Unless there is a change of course, the amount of plastic waste in the world’s oceans will outweigh the fish that live in them, by 2050, said the United Nations Secretary-General on Saturday, declaring that the world now faces a “global emergency” over the oceans. 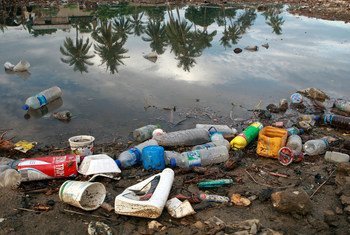