OCHA/Gemma Connell
Women in Ganyiel, Unity state, South Sudan, collecting bags of food. The situation in Ganyiel is dire, with thousands of people having fled to the area from famine-stricken Leer and Mayendit counties.
13 April 2017

“The crises in these four countries are protracted and complex – and the impacts will be felt for years,” said Stephen O'Brien, the UN Emergency Relief Coordinator, warning that the numbers are staggering as millions in South Sudan, Somalia, Yemen and north-east Nigeria are slipping deeper into crisis.

The briefing was also addressed by Anthony Lake, Executive Director of the UN Children’s Fund (UNICEF).

“Some 1.4 million children are severely malnourished. Over 21 million people lack sufficient access to health care, at a time when three out of the four countries are experiencing cholera outbreaks. And more than 20 million people lack clean water and sanitation,” said Mr. O'Brien in a statement delivered by Reena Ghelani, Deputy Director, of the UN Office for the Coordination of Humanitarian Affairs (OCHA) Coordination and Response Division.

“Around eighty per cent of affected populations live in rural areas and a combination of hunger and conflict is forcing people to be displaced, both internally and as refugees. Those who were forced from their homes in past years by conflict are being hit particularly hard as a consequence of this current crisis,” added the humanitarian coordinator.

He pointed out that the impacts of the protracted and complex crises in these four countries would be felt for years, citing broken communities, families torn apart and preventable deaths from disease.

“Famine,” Mr. O'Brien explained “is about much more than food insecurity. It is about compounding vulnerabilities that leave millions of people without basic human dignity, without hope for the future. It leaves children stunted and out of school. Development gains are stalled or reversed. People abandon their homes, and are robbed of their livelihoods, exacerbating instability across entire regions.” 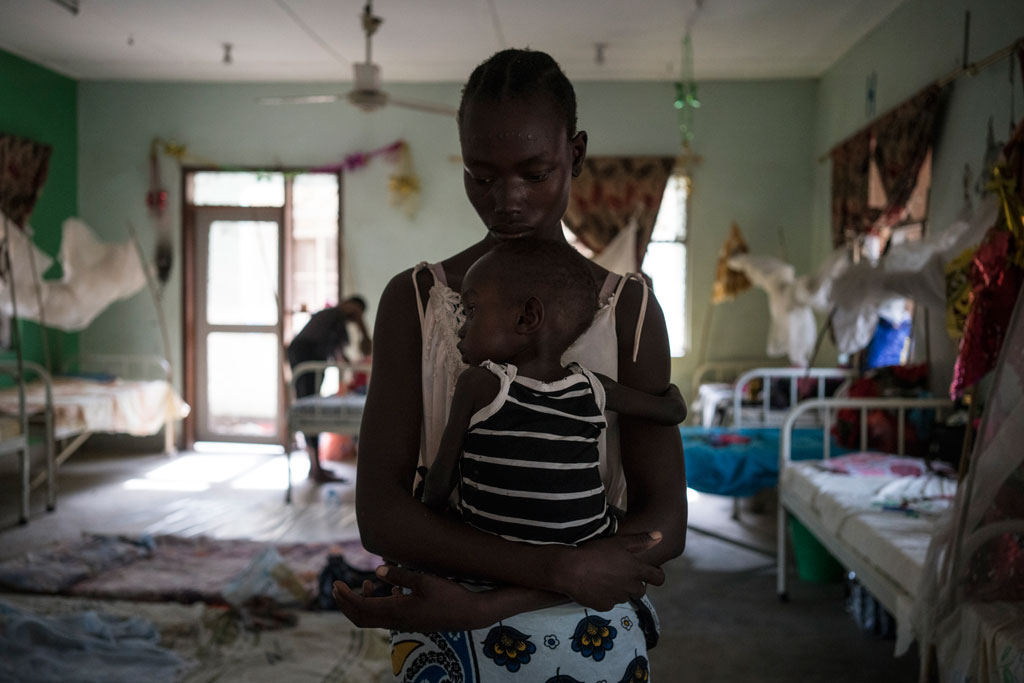 A young child suffering from malnutrition clings to her mother as she and other mothers queue to receive therapeutic milk to help treat their children's malnutrition in Al Sabbah Children's Hospital in Juba, South Sudan. Photo: UNICEF/Mackenzie Knowles-Coursin

He pointed out that while all four countries have unique contexts, they share the common component of protracted conflicts. Likewise, all four countries are marked by severe access constraints due to insecurity and some have costly bureaucratic impediments that impede the reach of life saving aid, and exacerbate the suffering of civilians.

He said that humanitarian operations in these four countries require more than $5.6 billion this year.

Underscoring the urgency, he added, “we need this funding now – especially for the priority sectors to respond and prevent famine in the four critical sectors of food security, nutrition, water and sanitation, and health.”

While humanitarians continue to deliver and scale-up where they are able, Mr. O'Brien listed four requirements to effectively reverse these crises: more political will to end the conflicts that have caused these crises; unhindered and sustained humanitarian access to assist those in need; further funding to back a robust humanitarian response; and a more comprehensive approach.

The President of the General Assembly, Peter Thomson, who convened the meeting, briefed on his recent visit to Senegal, Ethiopia and Egypt, underscoring how the respective leaders expressed grave concern over the humanitarian situation affecting some African countries, particularly in North-East Nigeria, South Sudan and Somalia, as well as neighbouring Yemen.

“They implored me on my return to United Nations Headquarters to help raise international awareness of the gravity of the situation, and to seek your assistance in helping the affected people and nations during their hour of greatest need,” he said.

“It is disturbing to note that children, women and the elderly are being disproportionately affected by the crisis,” continued Mr. Thomson, adding that some 1.4 million children are estimated to be at imminent risk of death from severe acute malnutrition.

In February, the Secretary-General launched a call to action. To date, this has resulted in donors providing around 21 per cent of the $4.4 billion required, he said.

“Today I wish to follow up that appeal to the international community. I urge Member States to dig deep into reserves of our empathy and common humanity,” he said, seizing the opportunity to call on Member States to scale-up their efforts to implement the 2030 Agenda for Sustainable Development, as part of the international community's longer-term efforts to prevent the conflict, extreme weather and inequality which is at the root of so much of the despair we are witnessing.

“To effectively respond to the crisis, all partners – across the peace, humanitarian and development pillars – will need to coordinate closely on the ground to save lives and build the resilience required to avoid such shocks in the future,” Mr. Thomson said. 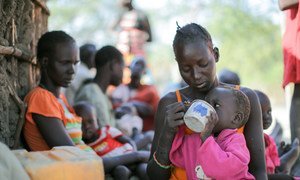 Millions across Africa, Yemen could be at risk of death from starvation – UN agency

Warning of increasing risk of mass deaths from starvation in many countries in Africa and in Yemen due to worsening drought and conflict, the United Nations refugee agency has called for international support to prevent the repeat of the 2011 tragedy in the Horn of Africa that claimed more than 260,000 lives.