The Security Council today extended the mandate of the United Nations mission in the Democratic Republic of the Congo (DRC) for another year but reduced the number of troops.

The Council also decided that the strategic priorities of MONUSCO are to contribute to the protection of civilians and support the implementation of the 31 December 2016 agreement on the electoral process.

In that regard, the Council called on the Government of the DRC and its national partners, including the Independent National Electoral Commission (CENI), to ensure a transparent and credible electoral process, in fulfilment of their primary responsibility to create propitious conditions for the forthcoming elections.

The Council tasked the Mission, with, among other responsibilities, ensuring effective and dynamic protection of civilians under threat of physical violence, including by preventing, deterring, and stopping all armed groups and local militias from inflicting violence on the populations.

The Secretary-General was requested to take the necessary measures to ensure full compliance of MONUSCO with the United Nations zero-tolerance policy on sexual exploitation and abuse and to keep the Council fully informed through his reports to the Council about the Mission’s progress in this regard.

It also urged troop- and police-contributing countries to take appropriate preventative action including pre-deployment awareness training, and to ensure full accountability in cases of such conduct involving their personnel. 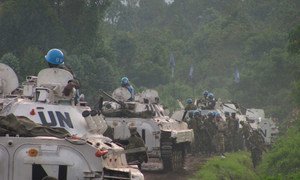 The Security Council today extended the mandate of the United Nations mission in the Democratic Republic of the Congo (DRC) for another year, warning that the humanitarian situation remains of great concern, as well as the delays in preparing for the November presidential elections.