UNDAC/Manabí
Thousands of buildings including this one in Portoviejo, Ecuador, were destroyed in the April 2016 earthquake.
9 March 2017

Around 50 countries and territories of the Americas at a United Nations-supported conference in Montreal, Canada, agreed a Regional Action Plan today to better protect their citizens from the destruction caused by natural and man-made disasters.

The plan, which is the centerpiece of the Montreal Declaration outcome document, marks the end of three days of deliberation and discussion by close to 1,000 government delegations and officials; non-governmental organizations (NGOs), civil society and other representatives, under the umbrella of the UN-backed Fifth Regional Platform for Disaster Risk Reduction in the Americas.

The conference, supported by the UN Office for Disaster Risk Reduction (UNISDR), aimed to put into action the principles and priorities agreed by more than 180 countries across the world in the 2015 Sendai Framework on disaster risk reduction, named after the Japanese city in which it was adopted.

That enshrined the same priorities outlined by the Canadian Minister of Public Safety and Emergency Preparedness, Ralph Goodale, who chaired and hosted the Montreal Conference, when he summarized the thrust of Thursday's Regional Action Plan.

He said there were 16 “specific actions” arising, covering four key areas, namely understanding risk better; improving governance when it comes to dealing with disasters; improving on resilience at all levels regarding risk reduction efforts, and finally, better preparedness.

According to UNISDR, while disaster deaths have gradually fallen around the world – expect in anomalous years marked by mega-disasters such as the 2004 Indian Ocean tsunami or the 2010 Haiti earthquake – economic impacts have skyrocketed and are now estimated at $500 billion a year.

Hurricane Matthew alone caused damage estimated at $15 billion when it ripped across Haiti, Cuba, the Dominican Republic, the Bahamas, the United States and the Canadian Maritimes last October.

Mr. Glasser said the Montreal Declaration was an “historic” moment for the Americas, and marked the first time that Member States in the region had come together and agreed a collective plan to make the Sendai Framework a reality.

“This is the number one an issue that effects both less developed and highly developed countries alike. It is an issue that results in huge loss of life each year and that is causing at least $500 billion a year in economic losses that is all money that could be used to fight poverty, increase access to education or healthcare or promote economic development."

“So this is not a hypothetical subject. It is a subject that is a matter of life and death and prosperity,” added Mr Glasser.

The Regional Action Plan now goes forward to the Global Platform on Disaster Risk Reduction, taking place in Cancun, Mexico, in May. 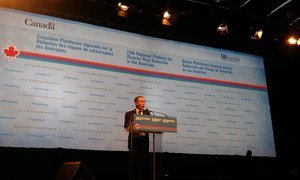