9 March 2017
Underscoring that the United Nations should not be, in any way, associated with the vile and vicious crimes of rape, sexual violence, exploitation and abuse, Secretary-General António Guterres has outlined a new victim-centred approach to prevent and respond to such abuses committed by those serving under the UN flag.

“Such acts of cruelty should never take place. Certainly no person serving with the United Nations in any capacity should be associated with such vile and vicious crimes,” said Mr. Guterres in a message announcing his report released today on the issue.

“Let us declare in one voice: We will not tolerate anyone committing or condoning sexual exploitation and abuse. We will not let anyone cover up these crimes with the UN flag,” he added.

The Secretary-General's report, Special measures for protection from sexual exploitation and abuse: a new approach, outlines a victim-centred strategy that is rooted in transparency, accountability and ensuring justice.

Noting that exploitation is also deeply rooted in gender inequality and discrimination, Mr. Guterres said that promoting gender equality throughout the UN system, including its missions and peacekeeping forces, would help advance parity and at the same time decrease incidents of abuse.

“Let us do so in the name of all who look to the UN for life-saving protection and support – and on behalf of the tens of thousands of UN personnel around the world who deliver that assistance with courage and commitment to the highest ideals,” he stressed.

VIDEO: A New Approach - How the United Nations is responding to sexual exploitation and abuse

Based on four tracks, the approach documented in the report focuses on the rights and dignity of victims; ending impunity for those guilty of crimes and abuses; drawing on the wisdom and guidance of all those who have been affected, civil society, local communities and others to strengthen and improve UN's efforts; and to raise awareness and share best practices to end the vicious scourge.

The report also emphasizes the need to engage with UN Member States and calls for a high-level meeting on sexual exploitation and abuses in 2017 on the margins of the general debate of the 72nd session of the General Assembly.

The report further notes that the UN chief would seek Member States support to establish a system-wide consolidated confidential repository of case information to be placed under the supervision of the Special Coordinator on Improving UN Response to Sexual Exploitation and Abuse.

It also includes a detailed list of actions and recommendations, along with the relevant UN entity that would be responsible for consultation with relevant stakeholders, as well as provides data on allegations of sexual exploitation and abuse across the UN system and by non-UN international forces authorized by a Security Council mandate, covering the period 1 January to 31 December 2016.

Partnership essential to stamp out the scourge – senior UN official

Speaking at a press conference following the launch of the strategy, the Secretary-General’s Chef de Cabinet, Maria Luiza Ribeiro Viotti, underscored that addressing sexual exploitation and abuse is matter of utmost importance for the UN chief. In addition to actions the Organization will take, Mr. Guterres has placed a strong emphasis on partnerships.

“[Sexual exploitation and abuse] is not a problem unique to the UN but the UN has been uniquely and very sadly associated with it,” she said, adding: “We need to recognize that this is not an issue that the we can tackle alone and we need a cooperative approach and partnership with our Member States.”

Reiterating the victim-centred approach of the strategy, she outlined that the response would be based on a framework of accountability and transparency and that it will include efforts both in terms of prevention and effective response.

“So we are going to see a lot of additional measures that will require not only efforts on the part of the UN but also on cooperation with Member States.”

One such effort is a ‘Circle of Leadership’ proposed by the UN chief, said Ms. Ribeiro Viotti. 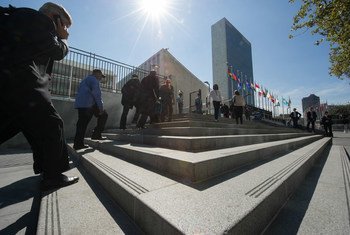 14 February 2017
United Nations Secretary-General António Guterres today announced the establishment of an internal review team that will take forward the reforms to the UN Secretariat peace and security strategy, functioning and architecture, which he outlined when he was appointed the Secretary-General last year.