There is no alternative to dialogue, the head of the United Nations peacekeeping mission in Kosovo today told the Security Council, citing the importance of high-level talks between Belgrade and Pristina, and calling for continued international engagement to maintain peace and stability in Kosovo and the wider Balkans region.

There is no alternative to dialogue, the head of the United Nations peacekeeping mission in Kosovo today told the Security Council, citing the importance of high-level talks between Belgrade and Pristina, and calling for continued international engagement to maintain peace and stability in Kosovo and the wider Balkans region.

Addressing the Council, Zahir Tanin, the head of the UN Interim Administration Mission in Kosovo (UNMIK) said the resumption of high-level dialogue between Belgrade, and Pristina was an “essential step” to chart a path out of a deteriorating situation and to publicly reconfirm their commitment to work together.

“Stability in Kosovo, normalization of relations between Pristina and Belgrade, are part of the wider effort to improve stability in the Western Balkans,” said Mr. Tanin, who is also the Special Representative of the Secretary-General in Kosovo.

He urged the 15 Council's members to “hold leaders to their words” to maintain “a sincere and consistent” commitment to dialogue, implement the agreements reached and avoid making statements which threaten the potential of progress to be made.

Mr. Tanin also highlighted also the international expectations of Pristina and Belgrade: non-confrontation, resolving issues through dialogue, and placing the objective improvement of the lives of people ahead of more limited and parochial calculations.

The statement comes as Belgrade is engaged in a political campaign for the presidential elections scheduled for April.

The senior UN official warned against allowing electoral politics to disrupt vital processes and progress: “Normalization of relations, reconciliation, and justice all belong to that broader horizon.”

Among other issues in his presentation to the Council, Mr. Tanin noted the importance of improving the social and economic situation in Kosovo. He underlined that “addressing unemployment, making progress in the rule of law and fighting corruption remain central for all people in Kosovo.”

At the very start of his speech, Mr. Tanin expressed his profound sadness at the passing of Ambassador Vitaly Churkin, the Representative of Russia to the United Nations, who died suddenly last week. 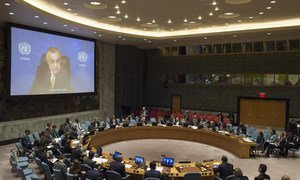