MONUSCO
From left: head of MONUSCO Maman S. Sidikou, Monsignor Marcel Utembi, Archbishop of Kisangani and President of CENCO, and Monsignor Luis Mariano Montemayor, Apostolic Nuncio in the DRC who issued a joint statement on the attack on churches.
24 February 2017

The United Nations peacekeeping mission in the Democratic Republic of the Congo (DRC) and the National Episcopal Conference of Congo, known as CENCO have called for an immediate end to the spate of violent attacks against Catholic facilities in several parts of the country.

The UN Organization Stabilization Mission (MONUSCO) and CENCO, along with the Apostolic Nunciature said they are “deeply concerned” about recent attacks on parishes and other Catholic facilities. According to the Mission, the attacks were particularly violent in the provinces of Kinshasa, Haut-Katanga, Kasaï-Central and Kasaï-Oriental.

They also reiterated that “places of worship belong to all, and as such, are supposed to be apolitical; Churches are also places of contemplation for the people and must be respected and protected. By attacking them, their perpetrators and/or sponsors are harming a common good of all Congolese.”

Urging the immediate cessation of these “deplorable acts,” MONUSCO, CENCO and the Apostolic Nunciature called on Congolese political actors to condemn them “just as firmly,” in order to frustrate any attempt to manipulate the implementation of the comprehensive and inclusive political agreement of 31 December 2016, which set out, among others, a timeframe for elections. 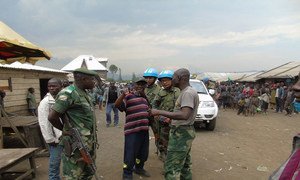 Increasingly concerned about the political impasse in the Democratic Republic of the Congo (DRC), the United Nations and regional partner organizations today urged political actors to work out how to implement the 31 December political agreement on a timeframe for elections.