UN Photo/Eskinder Debebe
Austria’s Foreign Minister Sebastian Kurz, in his role as the chair of the Organization for Security and Co-operation in Europe (OSCE), addresses the Security Council.
22 February 2017

Multilateral cooperation is the only way to achieve peace, security and stability, and there is no alternative to it, Austria’s Foreign Minister told the United Nations Security Council today, underscoring the work of his country in its role as the Chair of the Organization for Security and Co-operation in Europe (OSCE).

“As you can imagine, chairing OSCE is not an easy task,” said Sebastian Kurz, Federal Minister for Europe, Integration and Foreign Affairs of Austria, citing the difficulty in finding consensus among the regional body’s 57 States.

“Austria has taken over the OSCE chairmanship at a critical moment. Everywhere we look, there are grave threats to peace and security,” he added.

He said that the Austrian chairmanship will seek to contribute to defusing existing conflicts, create a platform to assists States in their efforts to combat radicalization and violent extremism, and help rebuild trust between the OSCE States.

On the crisis in and around Ukraine, he said the OSCE has demonstrated its crucial role in brokering a ceasefire and its special monitoring mission has helped prevent a worsening of the situation. However, support is need to increase the number of monitors on the ground, improve the technical equipment for monitoring and extend the operating hours along the contact line between Government and non-Government armed forces, he said.

Austria will also support all efforts to achieve progress on other conflict situations, including those in Transnistria, Georgia and Nagorno-Karabakh.

Turning to radicalization and terrorism, he said more than 10,000 people from the OSCE area have joined the Islamic State of Iraq and the Levant (ISIL/Da’esh). The most vulnerable group to be radicalized is youth, Mr. Kurz said, adding that he has appointed Peter Neumann, an expert on terrorism, as his special representative on radicalisation.

The Austrian chairmanship will also try to resume discussions on conventional arms control in Europe, and seek to launch a structured dialogue on current and future challenges and risks to security in the OSCE area.

Cyber security and social and economic cooperation – two issues discussed in Vienna recently - are areas where everybody stands to gain from more cooperation, and success in these areas will lead to more trust, he stressed.

“The same is true for human rights, the rule of law and democracy. Together we can strengthen the cohesiveness and resilience of our societies to better counter threats to our security,” he said.

In closing, he welcomed the establishment of a UN liaison office in Vienna that would enable even stronger cooperation between the OSCE and the UN. 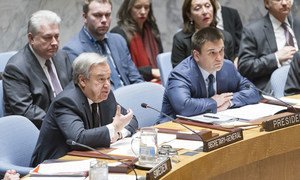 Noting that recent crises in Europe show that the continent remains at risk from new outbreaks of conflict, United Nations Secretary-General António Guterres called for reinforcing mutual trust and respect to strengthen stability and cooperation both within Europe and beyond.