AU/UN IST/Stuart Price
Billboards displaying a variety of advertisements along a street in Mogadishu, capital of the Horn of Africa nation Somalia.
19 February 2017

Strongly condemning today's terrorist attack at a marketplace in the Somali capital, Mogadishu, which reportedly killed at least 25 people and injured dozens more, the United Nations envoy in the country stressed that incident is a brutal reminder of the retrograde tactics employed by violent extremists.

“Killing civilians is despicable and achieves nothing – except to remind Somalia of the indifference of extremists to human life and suffering,” underscored Michael Keating, the Special Representative of the Secretary-General for Somalia and the head of the UN mission in the country (UNSOM), in a statement.

“The perpetrators need to be brought to justice swiftly,” he added.

Earlier today, at about 13:00 local time, a vehicle-borne improvised explosive device detonated at the Abagedo market near Kawa Guudey in the Dharkenley district of Mogadishu, claiming the lives of pedestrians and shopkeepers in the vicinity.

According to UNSOM, no group has yet claimed responsibility.

The attack comes at a time when Somalia is preparing for the inaugural celebrations of its newly elected Federal President, Mohamed Abdullahi Mohamed 'Farmajo', who came to office earlier this month amid an “extraordinary public outpouring of euphoria marking the beginning of a new chapter in Somali history that is ripe with opportunity and promise,” noted the statement.

In the statement, Mr. Keating also praised the work of the country's security forces and first responders in the aftermath of the attack, and offered his condolences to the families and friends of those who were killed. 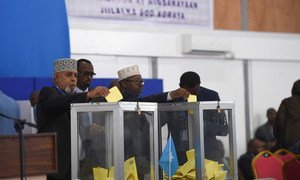 Congratulating former Prime Minister Mohamed Abdullahi ‘Farmajo’ on his election as Somalia’s new President, the United Nations Assistance Mission in the country (UNSOM) said the UN and the wider international community are ready to assist him in addressing the myriad challenges that await his Government.