UN Photo/Evan Schneider
Film Director Michele Mitchell (5th right) at the UN screening of "The Uncondemned" with the four women who testified before the International Criminal Tribunal for Rwanda and Godeliève Mukasarasi of the SEVOTA support group for widows and orphans.
15 February 2017
Women

Shame and stigma prevent many rape survivors in conflict zones from reporting the abuses they endure at the hands of war criminals whose sole aim in carrying out these horrific deeds is to torture and humiliate their enemy.

Yet the courageous testimonies of women who survived rape during the 1994 genocide in Rwanda provided the evidence required for a United Nations war crimes tribunal to find Jean-Paul Akayesu guilty, four years after the shocking conflagration, marking the first judgment for the crime of genocide under international law.

Rape was made a part of Akeyesu’s genocide conviction.

In the latest episode of the UN Radio podcast series The Lid is On, Michele Mitchell, a co-director of the documentary film, The Uncondemned, was researching how and when rape was first prosecuted as a crime of war for her next project when she first heard about the so called ‘Akayesu’ case.

She began by studying the wrong case. Most of the documentation she found had to do with the International Criminal Tribunal for the Former Yugoslavia (ICTY).

It was not until Ms. Mitchell spoke to a human rights lawyer Sara Darehshori, a senior counsel for the Human Rights Watch United States’ programme, that she found out about a historic trial that went before the International Criminal Tribunal for Rwanda (ICTR).

We promise to speak only the truth, to say what we saw and not what we heard; for justice not revenge

At the time, almost 20 years ago, Sara was a co-counsel for the prosecution. She is the one who found the ‘smoking gun’ that allowed the UN tribunal to amend its indictment against the former Mayor of Taba town in Rwanda, Jean-Paul Akayesu, and try him for rape as an act of genocide.

During the 1994 genocide in Rwanda, in a span of one hundred days, between eight-hundred thousand and one million men, women and children were massacred by Hutu militia – a rate of killing four times greater than at the height of the Nazi Holocaust.

Michele said she did not want to do “just another prosecutor’s story.” She wanted to include the women who had testified during this historic trial. She said that she wanted to understand what motivated these women who had suffered so much to say “enough” and to take action.

“They were killed simply because of who they are; because they are Tutsis. Hutus protecting Tutsis or those married to Tutsis were also killed,” said Adama Dieng, the UN Special Adviser on the Prevention of Genocide said during a screening of the film on the ground-breaking trial, organized by the Outreach Programme on the Rwandan Genocide and the United Nations.

As the UN International Criminal Tribunal for Rwanda (ICTR) came to a close, the world body's Special Advisor on the Prevention of Genocide and former ICTR Registrar Amada Dieng shares his experience in bringing innovation to the Tribunal.

In Taba alone, close to 2,000 Tutsis were murdered.

Many of the women were raped by the armed local militia, or Interahamwe, and communal police, investigations by the UN International Criminal Tribunal for Rwanda, or ICTR, uncovered.

One witness, known as ‘JJ,’ and other rape survivors placed him at the scene of the crime, and confirmed that he used his authority to incite and encourage the militia and police to carry out these acts, although he was not accused of rape by any of the women.

On 2 September 1998, Jean Paul was found guilty of genocide and crimes against humanity. With this case, the ICTR became the first international tribunal to enter a judgement for genocide and the first to interpret the definition of genocide set forth in the Geneva Conventions, according to the UN Mechanism for International Criminal Tribunals.

"The Lid is On" - UN Radio Podcast: "How rape became an act of genocide"

In the same judgement, the ICTR also defined the crime of rape in international criminal law and recognized rape as a means of perpetrating genocide.

Akayesu was sentenced to life and found guilty of crimes against humanity for “ordering, aiding and abetting” rape.

Delivering a statement following the ruling, Judge Navanethem “Navi” Pillay, who went on to become the UN High Commissioner for Human Rights, said the UN tribunal wanted to “send out a strong message that rape is no longer a trophy of war.”

As the Rwandan women sat behind a curtain in a tiny court in Arusha, Tanzania and recounted in painful detail the brutal and violent sexual assaults they endured during the genocide, they had no idea they would make history. And that by doing so, they would give hope to survivors like them.

♦ Receive daily updates directly in your inbox - Subscribe here to a topic.
♦ Download the UN News app for your iOS or Android devices.
rape 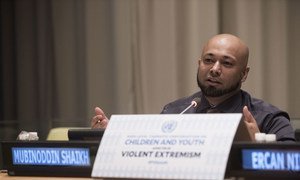 When he was 19, Mubin Shaikh, believed that “you could change the world overnight, and you could do it through violence.”