“We have received information that Hussein’s forced marriage, rape and other forms of gender-based violence against her were not taken into account by the Court as evidence to mitigate the sentence, and that the most stringent guarantees of a fair trial and due process were not fulfilled in this case,” Ravina Shamdasani, spokesperson for the High Commissioner for Human Rights told the press in Geneva.

As the case has drawn international attention, the UN Human rights office said that it has become increasingly concerned for the teen’s safety and that of her lawyer and other supporters.

“We urge the authorities to ensure full protection for Hussein’s physical and psychological integrity during her detention, as well as full respect for her rights to a fair trial and appeal,” Ms. Shamdasani stressed.

In trials of capital punishment, scrupulous respect for fairness is particularly crucial.

The UN expert on summary executions has argued that imposing the death penalty against clear evidence of self-defense constitutes an arbitrary killing, particularly where women have been charged with murder when defending themselves.

“We call on the authorities to fully take into consideration Hussein’s claim of self-defense against the attempt by the man to rape her, after he had reportedly already raped her on a previous occasion with the help of three other people,” Ms. Shamdasani continued.

With only 15 days to appeal the Court’s decision ­– which was announced last week­ – the right for a conviction and sentence to be reviewed by a higher tribunal is particularly important.

“A review that is limited to the formal or legal aspects of the conviction – without any consideration of the facts – is not sufficient under the International Covenant on Civil and Political Rights, which Sudan has ratified,” the spokesperson reminded the press.

The UN Committee on the Rights of the Child and the UN Human Rights Committee have expressed serious concern about the situation of women’s human rights in Sudan.

“Hussein’s tragic case is an opportunity for Sudanese authorities to send a clear message that gender-based violence will not be tolerated in the country,” concluded Ms. Shamdasani, adding that the office would remain in contact with Sudanese authorities.

♦ Receive daily updates directly in your inbox - Subscribe here to a topic.
♦ Download the UN News app for your iOS or Android devices.
forced marriage|rape|violence against women 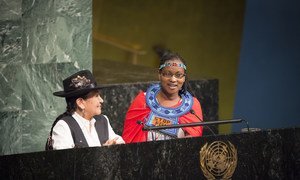 As #MeToo activists continue to push for political, economic and social equality between the sexes, a key question is being asked: Are marginalized women and girls – ones who are part of indigenous communities, disabled, or part of the lesbian and transgender community – being heard?