UN Photo/Eskinder Debebe
Secretary-General António Guterres (fifth right) poses for a group photo with participants of the UN Holocaust Memorial Ceremony, on the occasion of the International Day of Commemoration in Memory of the Victims of the Holocaust.
27 January 2017
Human Rights

Decrying the anti-Semitism that led to the Holocaust, the international community today remembered millions of people who suffered in the genocide and honoured the survivors who continue to educate future generations about the ills that hatred and discrimination can bring.

He noted that after the Holocaust, the world seemed eager to find a more cooperative path, which led to the creation of the United Nations with its Charter, the Universal Declaration of Human Rights and the Genocide Convention.

“Humankind dared to believe that tribal identities would diminish in importance. We were wrong,” the Secretary-General said. “Irrationality and intolerance are back.”

Addressing representatives from the 193 Member States gathered in the General Assembly Hall to mark the annual Commemoration in Memory of the Victims of the Holocaust, Mr. Guterres said that today anti-Semitism continues, alongside racism, xenophobia, anti-Muslim hatred and other forms of intolerance, triggered by populism and gaining ground in public discourse.

VIDEO: Speaking at the Holocaust memorial ceremony, Secretary-General António Guterres says he was “extremely concerned at the discrimination faced by minorities, refugees and migrants across the world.”. Credit: UN News

‘Dehumanization took hold and the descent into barbarity was quick’

He voiced his extreme concern at the discrimination faced by immigrants, refugees and minorities across the world, particularly the stereotyping of Muslims, referring to how the Holocaust was allowed to spread: “Hardships and instability created fertile groups for scapegoating."

Drawing attention to the powerful exhibit now at UN Headquarters called ‘State of Deception: The Power of Nazi Propaganda,’ he said propaganda helped erode the bonds of humanity. The word “Jewish” was used constantly in association with society’s ills. “Ultimately indifference prevailed, dehumanization took hold, and the descent into barbarity was quick,” he told those gathered at the ceremony, which this year focuses on educating for a better future.

History created lessons for our time, Mr. Guterres said, urging the international community to be vigilant, invest in education and youth, and to strengthen social cohesion “so that people feel that diversity is a plus, not a threat.”

The UN chief spoke personally about the history of Jews in his home country, Portugal, noting that anti-Semitism is “more than a question of religion, [it] is essentially an expression of racism.”

Mr. Guterres added proudly, his wife signed on behalf of the Lisbon Municipality, an agreement with the Israeli Community of Lisbon to establish the Lisbon Jewish Museum. 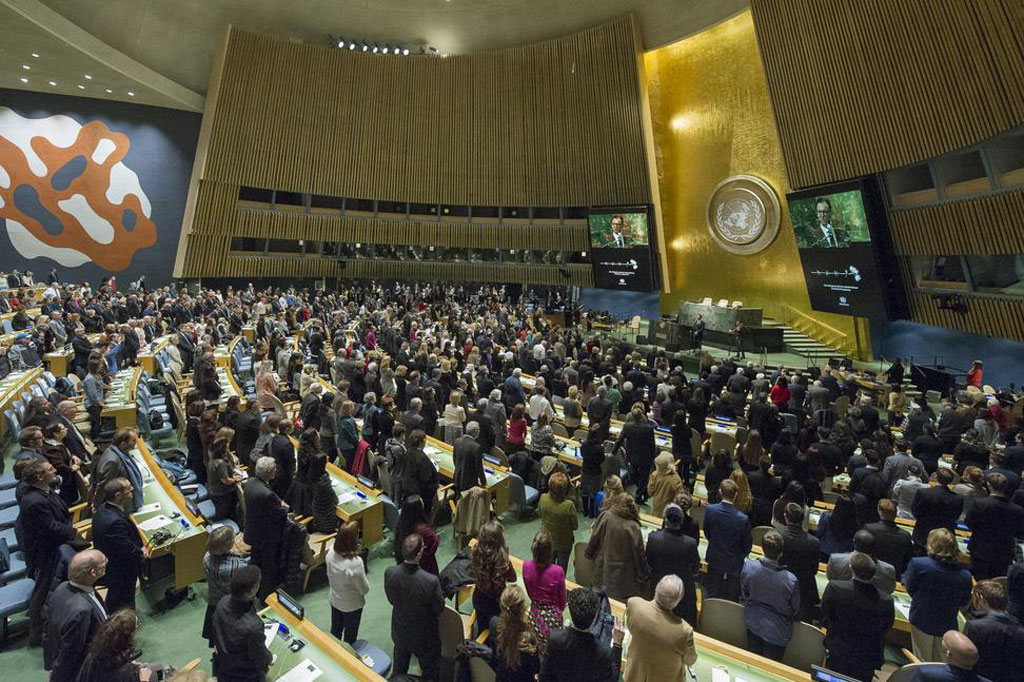 Wide view of the General Assembly on the occasion of the International Day of Commemoration in Memory of the Victims of the Holocaust. UN Photo/Manuel Elias

Today’s event in the General Assembly Hall started with recognition of the Holocaust survivors and Red Army veterans in attendance and a minute of silence for the millions of people killed in Europe in the years leading up to 1945. It featured soulful performances by Jewish singers and musicians, as well as a dramatic recitation of memorial prayers.

The President of the General Assembly, Peter Thomson, began his remarks by quoting Mr. Wiesel, asking: “‘How does one mourn for fix million people who died? How many candles does one light? How many prayers does one recite?’”

Mr. Thomson called for a rededication “to learning the lessons of the past so that humanity may never repeat such atrocities in the future.”

He called for education to teach the dangers of extremism, the importance of defending the vulnerable, and the need to stand up against racism and prejudice.

“Interfaith dialogue, respect for human rights, and the embracing of democratic and humanist values at the heart of the Sustainable Development Goals (SDGs) are central responsibilities for us all,” Mr. Thomson said, in reference to the 17 targets aiming to end poverty, protect the planet, and ensure prosperity for all.

“Young people must be taught the ethics and logic inherent in defending our common humanity, of preventing mass atrocity crimes, and of bringing perpetrators to justice,” he added.

‘Those who could not keep rhythm were shot’

The keynote address was given by Noah Klieger. Born in 1926, Mr. Klieger, a survivor of Auschwitz, had founded a youth movement to help Jews cross the Swiss border and went on to become one of Israel’s most notable journalists. He is today allegedly the oldest working journalist in the world.

Noah Klieger, keynote speaker and Holocaust survivor, addresses the General Assembly on the occasion of the International Day of Commemoration in Memory of the Victims of the Holocaust. UN Photo/Manuel Elias

Mr. Klieger, who travelled from Israel to participate in the ceremony, took the podium to a standing ovation. His grandson, seating nearby, reminded Mr. Klieger to speak English, to which the Holocaust survivor replied good humouredly, “Why don’t you all learn Hebrew.”

Speaking about the Shoah, as the Holocaust is known in Hebrew, he talked about the last days of the war, when the Germans forced people from the Auschwitz camp to march to the border town of Gliwica.

“We had to march in a rhythm that nobody could keep. And those who could not keep the rhythm were shot. The roads were full of those who had been shot by DSS before they couldn’t make it. Others just laid down,” Mr. Klieger said, about the five-day death march that killed 41,000 by his estimates.

In a speech peppered with jokes and poignant remembrances, Mr. Klieger recounted his days in the camp. He spoke about three dreams that he never thought would be possible; the first of which was to be free.

He praised the value of education and the creation of the Holocaust and the UN Outreach Programme to teach people around the world about what took place, but added that “one who has not lived through the German camps does not know about the German camps.”

He called for the creation of a teaching programme in all schools around the world so that the horrors of the Holocaust are not repeated and to counter anti-Semitism.

Among other speakers today was Danny Danon, the Permanent Representative of Israel to the United Nations. Calling the Holocaust “the most devastating tragedy in history,” Mr. Danon said it was a failure “to recognize the warning signs of hatred and bigotry.”

The Ambassador called on the UN to appoint a special envoy to combat anti-semitism so that the international community “would never remain silent.”

“It is our duty to work together to prevent extremism and violence by promoting tolerance, understanding and compassion,” Mr. Danon said.

Before leaving the podium, the Ambassador vowed that “anti-Semitism would not defeat us.”

♦ Receive daily updates directly in your inbox - Subscribe here to a topic.
♦ Download the UN News app for your iOS or Android devices.
Holocaust Memorial

Describing religious intolerance as one of the greatest global threats, United Nations Secretary-General Ban Ki-moon today urged the world to join together for peaceful coexistence and a life of dignity for all.