The world has a duty to remember that the Holocaust was a systematic attempt to eliminate the Jewish people and so many others, United Nations Secretary-General António Guterres said today, and building a future of dignity and equality for all will honour the victims of this “incomparable tragedy in human history […] who we will never allow to be forgotten.”

The world has a duty to remember that the Holocaust was a systematic attempt to eliminate the Jewish people and so many others, United Nations Secretary-General António Guterres said today, noting that building a future of dignity and equality for all will honour the victims of this “incomparable tragedy in human history […] who we will never allow to be forgotten.”

Marking the International Day of Commemoration in Memory of the Victims of the Holocaust, Mr. Guterres said in video message that it would be a dangerous error to think of the Holocaust as simply the result of the insanity of a group of criminal Nazis.

“On the contrary, the Holocaust was the culmination of millennia of hatred, scapegoating and discrimination targeting the Jews, what we now call anti-Semitism,” he emphasized, adding that tragically and contrary to the international community's resolve, anti-Semitism continues to thrive.

Moreover, the world is also witnessing a “deeply troubling” rise in extremism, xenophobia, racism and anti-Muslim hatred. “Irrationality and intolerance are back,” said the UN chief.

Stressing that this is in complete contrast to the universal values enshrined in the UN Charter and Universal Declaration of Human Rights, he said: “We can never remain silent or indifferent when human beings are suffering. We must always defend the vulnerable and bring tormentors to justice. And as the theme of this year's observance highlights, a better future depends on education.”

“After the horrors of the 20th century, there should be no room for intolerance in the 21st. I guarantee you that as Secretary-General of the United Nations, I will be in the frontline of the battle against anti-Semitism and all other forms of hatred,” said Mr. Guterres.

VIDEO: Message by Secretary- General António Guterres on the International Day of Commemoration in Memory of the Victims of the Holocaust.

Also today, in his remarks, UN High Commissioner for Human Rights, Zeid Ra'ad Al Hussein said the day of remembrance for the victims of the Nazi Holocaust forces the world to contemplate the horrors to which bigotry, racism and discrimination ultimately lead.

“The sadistic brutality of the atrocities inflicted by the Nazi regime on Jews, Roma, Slavs, persons with disabilities, political dissidents, homosexuals and others was nourished by layer upon layer of propaganda, falsifications and incitement to hatred,” he said, adding that they were denigrated and smeared; one after another, their rights were refused, and finally, even their humanity was denied.

“'It happened, therefore it can happen again,' wrote Primo Levi, who endured and survived the concentration camp at Auschwitz Birkenau. As we honour the victims of the Holocaust, we must also acknowledge the need to prevent the recurrence of anti-Semitism and all forms of racial and religious hatred and discrimination today,” the UN rights chief stated.

It is therefore essential to uphold independent rule of law institutions and a free press, which can hold leaders to account and establish a truthful record of the facts. It is crucial to maintain respect for human rights, especially in respect of the right to life and wellbeing of all people regardless of their origin or ethnicity.

“Above all, education must be at the core of all efforts to combat anti-Semitism, racism, and all forms of discrimination. Although an important part of that work must be centred on schools and other academic fora, education in this sense must extend far more broadly, so that we can undo the stereotypes which generate so much injustice and prejudice throughout society,” stressed Mr. Zeid.

A Holocaust Memorial Ceremony is taking place today at UN Headquarters in New York, hosted by the Under-Secretary-General for Communications and Public Information, Cristina Gallach. Speakers are expected to include Peter Thomson, President of the UN General Assembly; Danny Danon, Permanent Representative of Israel to the UN; and Michele J. Sison, United States Deputy Representative to the UN.

Noah Klieger, a 90-year old Holocaust survivor, will be keynote speaker. Cantor Israel Singer, of Congregation Temple Emanu-El of Closter, New Jersey, will recite the memorial prayers and be accompanied by violinist Artur Kaganovskiy. The ceremony will include music by guitarist Gary Lucas and vocalist Rachel Joselson, Doctor of Music Arts and Associate Professor at the University of Iowa. 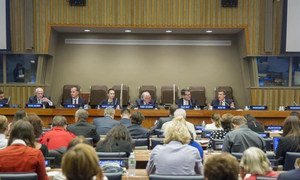 Describing religious intolerance as one of the greatest global threats, United Nations Secretary-General Ban Ki-moon today urged the world to join together for peaceful coexistence and a life of dignity for all.