During World War II, Chiune Sugihara, a Japanese diplomat posted as an acting consul in Lithuania, disobeyed instructions from his own Government and issued visas for Jews fleeing Nazi persecution.

During World War II, Chiune Sugihara, a Japanese diplomat posted as an acting consul in Lithuania, disobeyed instructions from his own Government and issued visas for Jews fleeing Nazi persecution.

Sugihara issued more than 2,000 transit visas to Jewish refugees in 1940, continuing to sign the travel documents even after the Japanese consulate was closed down and until his train pulled away from the station. Many of the visas were for entire families. As a result, it is estimated that Sugihara saved 6,000 Jews.

Sugihara came to be known as Japan's Schindler after Oskar Schindler, a German industrialist who hired about 1,200 Jews to work at his factories during the Holocaust, thus saving their lives.

Ahead of the International Day of Commemoration in Memory of the Victims of the Holocaust, observed annually on 27 January, dozens of descendants of the so-called "Sugihara" survivors attended yesterday's screening of a film that depicts his humanitarian acts – one of the many Holocaust remembrance events being held at the United Nations Headquarters in New York this week.

"My father was No. 299 on the list and my uncle was No. 27," Richard A. Salomon told UN News, stressing that without Sugihara's act of kindness and righteousness, "they would have died and perished at the hands of the Nazis."

The journey allowed them passage through Japan to Shanghai, China, and from there to India and ultimately to the United States.

"Sugihara gave an ultimate gift – gift of life – to my family and so many others. We need to continue to keep that memory alive," Mr. Salomon said, adding that he has co-founded a Holocaust museum in Illinois, which has the largest collection of Sugihara memorabilia in the United States.

The 2017 theme for the Holocaust remembrance and education activities undertaken by the Holocaust and the United Nations Outreach Programme – a programme established under a resolution in 2005 of the UN General Assembly – is "Holocaust Remembrance: Educating for a Better Future."

History repeats itself and we should try to learn from our past. But we have a tendency to forget what we’ve learned Cellin Gluck

"History repeats itself and we should try to learn from our past. But we have a tendency to forget what we've learned," Mr. Gluck warned, noting that his film is "synchronistically, very contemporary" because the world is facing a similar problem again, perhaps not exactly the same way, but in the forms of discrimination against refugees and of groups ostracized.  "We cannot allow it to repeat itself," he emphasized.

Movie Director Cellin Gluck describes to UN News how his film, which explains how Japanese diplomat Chiune Sugihara saved the lives of thousands of Jews, can teach us not to repeat the mistakes of the past. Credit: UN News

As a result of issuing visas for Jewish refugees, Sugihara became a "persona non grata" (a Latin expression for unwanted person) to his own Government, which has since recognized his heroism.

Speaking before the film screening, UN Under-Secretary-General for Communication and Public Information Cristina Gallach told the audience that "by telling personal stories of the Holocaust, films can help remind us all of the dangers of extremism and its impact on our fellow human beings."

Richard A. Salomon explains losing his father at 2 years old and found this portrait of him and his uncle while recently watching a documentary.
Yehuda Gelbfish shows the original visa delivered by Sugihara to a member of his family.
Susie Gulkowitz reflects on the effect of one man's actions on hundreds of thousands of lives.
Gary Gelbfish says that he wouldn't be alive if it wasn't for the visa that his father obtained from Sugihara.

UN Department of Public Information has embarked on a number of activities, including special events, film screenings, discussion papers from leading academics, information materials, partnerships with intergovernmental organizations and other initiatives, to encourage awareness and remind the world of the threat posed to us all when genocide and crimes against humanity are allowed to occur. 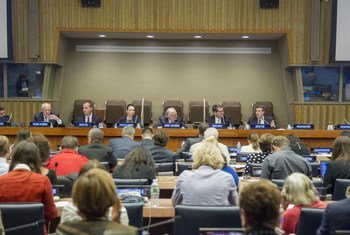 7 September 2016
Describing religious intolerance as one of the greatest global threats, United Nations Secretary-General Ban Ki-moon today urged the world to join together for peaceful coexistence and a life of dignity for all.