UNICEF/Tomislav Georgiev
A woman holds a small child, while others who have fled their homes amid the ongoing refugee and migrant crisis stand behind her, on a rainy day near the town of Gevgelija, former Yugoslav Republic of Macedonia, on the border with Greece.
26 January 2017

With hate speech and rhetoric against migrants and refugees on the rise in various parts of the world, and the increased role of media in shaping perceptions towards them, the United Nations Alliance of Civilizations (UNAOC) today co-sponsored with the European Union (EU) a symposium drawing attention to this growing challenge and explore efforts to combat it.

“2016 has been an elections year in many countries. Media, for better or for worse, was used as a tool shaping people’s perceptions around issues and swaying their votes accordingly,” Nassir Abdulaziz Al-Nasser, the High Representative for the UNAOC, said in his remarks at the symposium.

Noting that the refugees and migrants crisis featured prominently in the campaigns and public discussions, he added: “[While] we noted solidarity towards refugees, we also witnessed a surge of xenophobic hate speech.”

Further, noting that mass exodus of refugees and migrants fleeing conflict and poverty in Syria, Iraq, Libya and other countries into Europe resulted in “fuelling fears, prejudices and even hatred against those who are perceived as ‘the other’ by local populations,” he expressed that such distorted perceptions have also led to violent reactions within host societies on some occasions.

With this is mind, he noted that the UN global campaign against racism and xenophobia, ‘Together: respect, safety and dignity for all,’ aims to change negative perceptions and attitudes towards refugees and migrants, and to strengthen the social contract between these populations and host communities. 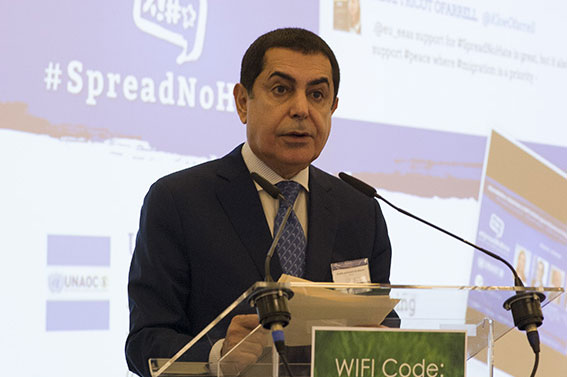 Amid media distortion, ‘we will do our utmost to tell the real stories of refugees’

Speaking to UN News ahead of the symposium, Mr. Al-Nasser expressed concern that migrants and refugees are inaccurately portrayed as an economic drain or a strain on public benefits, even though UN Member States have recognized the positive contribution of migrants to inclusive growth and sustainable development, for example through the 2030 Agenda and the New York Declaration on refugees and migrants adopted at a UN summit last year.

He, however, added that “migrants’ positive contribution to societies is not acknowledged and rarely understood by host communities.”

Underlining the importance of media, and in particular social media, which can influence perceptions either way, Mr. Al-Nasser said that despite progressive policies defended by some European leaders, refugees continue to be portrayed by some in the media as “potential terrorists” and “threats to national security”.

“Social media provides a wide and open platform for hate speech, facilitating the rapid spread of negative narratives and ideas online,” he added, noting that this environment has created a heightened sense of fear and mistrust in host communities towards migrants and refugees around the world, resulting in adverse impact on their rights and freedoms.

“But we will do our utmost to tell the real stories of refugees, in order to protect communities’ interests and safeguard the rights of each individual. I think a balance must be found that protects the freedom of expression as well as the rights of migrants as human beings with human rights,” the High Representative stated.

Turning to civil society, Mr. Al-Nasser called on the international community to acknowledge the role of civic actors and groups in formulating public policies aimed at curbing the spread of hate speech, and influencing public attitudes towards restricting the use of hate speech in media, including through policy recommendations.

The symposium was organized jointly by UNAOC and the EU in the Belgian capital, Brussels, under the UNAOC’s #SpreadNoHate initiative.

The Alliance was established in 2005 to work towards a more peaceful, more socially inclusive world, by building mutual respect among peoples of different cultural and religious identities, and highlighting the will of the world’s majority to reject extremism and embrace diversity.

AUDIO: UNAOC High Representative Abdulaziz Al-Nasser on the significance of the symposium