IOM
The International Organization for Migration (IOM) distributes non-food aide in Gogjiali, Iraq, which has turned into a hub to where Iraqis escaping Mosul arrive.
13 January 2017

Since the start of the Iraqi military operation to retake Mosul in October last year, more than 144,500 people have been displaced and a majority of them are in desperate need of live-saving humanitarian assistance, the United Nations migration agency has warned.

“Humanitarian aid is essential for the survival of the thousands of families displaced by Mosul operations who have left everything behind to save their own lives,” said Thomas Lothar Weiss, the Chief of the UN International Organization for Migration (IOM) operations in Iraq.

“Assistance must provide for a range of needs – including shelter, household items, health and livelihoods,” he added, underlining the need for additional funding to sustain relief efforts and to prepare for further displacement from the ongoing crisis.

According to the agency’s Displaced Tracking Matrix (DTM), 144,588 people have been displaced between the 17 October 2016 start of military operation against Islamic State of Iraq and the Levant (ISIL/Da’esh) militants in Mosul and 12 January this year.

These latest figures come amid fears that the western part of the city could soon face a siege, with enormous implications for the civilians remaining there.

At the start of the military operations, some 1.5 million civilians were living in Mosul city.

Situation in Gogjiali town – where thousands have passed through

Two days ago, an IOM team visited the strategic town of Gogjiali, which was retaken on 1 November last year.

Situated about 10 kilometres (about 6.2 miles) east of Mosul, on the road to Erbil, Gogjiali has seen thousands of displaced Iraqis pass through it: some heading to emergency sites and camps for internally displaced persons (IDPs) but others remaining there, due to its proximity to Mosul. 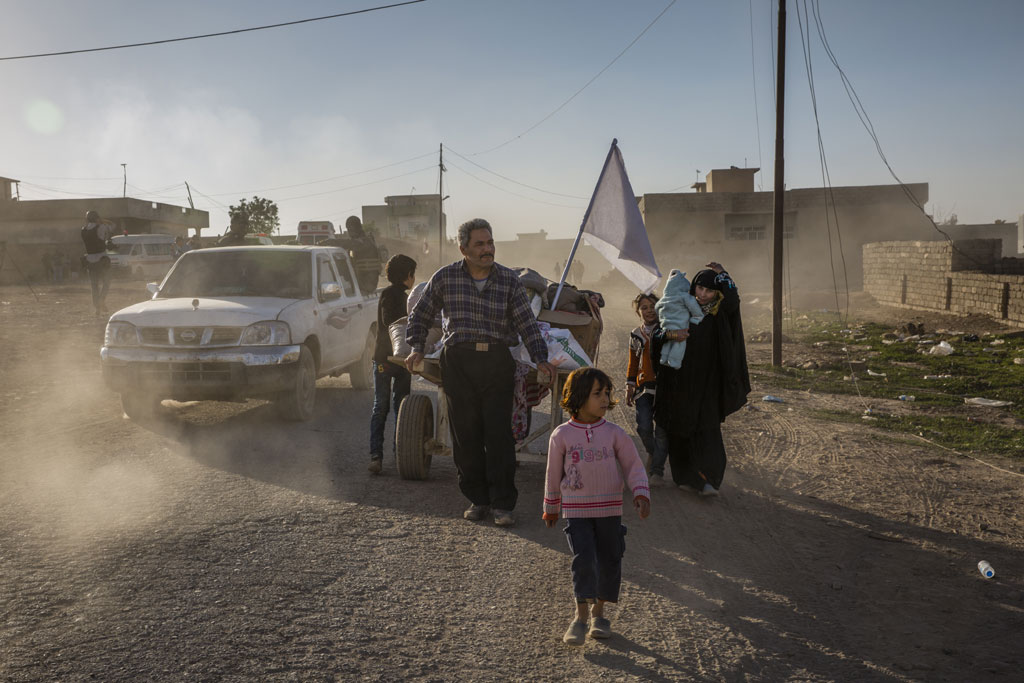 A family that fled their home in Mosul arrive in Gogjali town with the possessions they were able to carry. (file) Photo: UNHCR/Ivor Prickett

According to the team, conditions in the town – where families who have been separated by ISIL’s occupation of Mosul often reunite for the first time – are dire.

Recalling the distribution of some 700 winter non-food item relief kits to the IDPs in the town and its vicinity, IOM reported:

Most spoke of leaving their neighbourhoods to escape from ISIL’s random shells and the fear of being buried under the rubble. ‘What people in Mosul went through was extremely hard […] we saw death, hardship, hunger, siege,’ said one IDP.

‘They are oppressors, who damaged us a lot. For the last two and a half years, our children and university students, have not been able to finish their education. They sat at home, afraid of Da’esh. They (Da’esh) lacked every sense of humanity,’ said another, a mother.”

(names have been redacted)

Continuing to provide relief and assistance

Meanwhile, IOM continues to provide relief and assistance to the affected people. In cooperation with Iraq’s Ministry of Displacement and Migration, the agency established an emergency site at the Al-Qayara Airstrip (south of Mosul).

The site is now hosting some 15,931 displaced persons (2,697 families) in plots with water and sanitation facilities. Another 350 new arrived families are waiting in six Rubb halls – large, relocatable tent-like structures – until further plots and tents are ready to move into.

Similarly, building capacity for 10,000 plots is ongoing for the expansion phase, in addition to 7,500 plots at IOM’s second constructed emergency site in Haj Ali (south-east of Mosul). These two sites will provide shelter for over 105,000 individuals.

Haj Ali site opened last week and received its first 74 families (398 individuals). It is expected that by Saturday, IOM engineers will complete enough plots to accommodate 120 families at the site.

To assist Iraqis displaced by Mosul operations, IOM is also providing critical humanitarian aid, including shelter, winter emergency household items, fuel, health and psychosocial services for more than 240,000 people in newly retaken areas, as well as for those in camps and emergency sites.

The United Nations Humanitarian Coordinator in Iraq, Lise Grande, reported today on the conditions in Mosul, a city witnessing one of the largest urban military operations since the Second World War, warning that a proper humanitarian response, conditions that created the Islamic State of Iraq and the Levant (ISIL/Da’esh) could remain.