Highlighting that the Colombian peace process faced and continues to face a range of challenges but also offers “solid” opportunities, the Special Representative of the Secretary-General for the country today called on the United Nations Security Council for its continued attention and strong support to the country.

Noting, for example the failure to achieve the first benchmark of the ceasefire process – full concentration of Revolutionary Armed Forces of Colombia-People's Army (FARC-EP) combatants and militias in areas where weapons will be laid down by 1 January – as well as the apparent impossibility to destroy “unstable” ammunition spread in caches throughout the country by 30 January, SRSG Jean Arnault added:

“[However] in spite of this setback, last week, President Juan Manuel Santos Calderón and the FARC Secretariat reaffirmed their determination to do everything possible to meet the original goal of the comprehensive laydown of weapons by early June.”

In a briefing to the Council today, he informed its members of the progress made over the last couple of weeks on matters such as the FARC members accessing the country’s subsidized health system.

Further, emphasizing that with concerted efforts from all sides, the UN envoy said that advancing the ceasefire process was very much possible. He added that the timetable for storing of weapons under UN monitoring could also be adjusted without extending the overall 180-day timeframe.

On the legislative developments in the country, Mr. Arnault informed the Council that on 28 December 2016, the Congress passed an amnesty law excluding serious crimes. The law was ratified by President Santos two days later.

“The passage was a key request from the guerrilla organization and, besides paving the way for the release or conditional release of some 4,000 prisoners, it should facilitate the first key step towards the laydown of weapons,” he noted, adding that next week, the Congress is expected to take up draft laws on establishing frameworks for truth, justice and reparation, including the Special Jurisdiction for Peace, the Truth Commission and the Missing Persons Search Unit.

Mr. Arnault also updated the Council of work of the UN Mission in Colombia, which he heads, as well as that of the tripartite monitoring and verification mechanism which has now deployed to a number of locations at the local level.

In early October 2016, Colombian voters narrowly rejected the historic peace accord between the Government and the FARC-EP, meant to end the Western Hemisphere's longest running conflict. That deal was the culmination of four years of talks hosted in Havana, Cuba, between the two sides, and which led to a cessation of hostilities and agreements on key issues such as political participation, land rights, illicit drugs and victims' rights and transitional justice. The two sides signed a new agreement in late November. 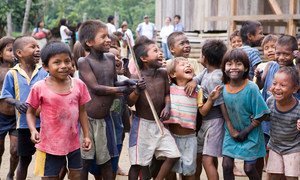 UN welcomes ratification of new peace accord in Colombia

Welcoming the Colombian parliament's ratification of the new Final Peace Agreement between the Government and the Revolutionary Armed Forces of Colombia-People's Army, United Nations Secretary-General Ban Ki-moon and the Security Council have expressed hope for its swift implementation for the benefit of all Colombians.