Expressing concern at escalating tensions and threat of renewed conflict following developments in central Libya, the United Nations envoy for the country urged all parties to work together on reconciliation and to refrain from any rhetoric that could inflame the situation.

“I urge all parties to act with restraint and to resolve issues through peaceful dialogue,” said Martin Kobler, the Special Representative of the Secretary-General for Libya and the head of the UN Support Mission in the country (UNSMIL).

According to UNSMIL, Mr. Kobler also emphasised the need for urgent renewed efforts to find solutions to political issues that will allow for the full implementation of the Libyan Political Agreement.

Signed in December 2015, the Agreement contains four main principles: ensuring the democratic rights of the Libyan people, the need for a consensual government based on the principle of the separation of powers, oversight and balance between them, as well as the need to empower State institutions like the Government of National Accord so that they can address the serious challenges ahead, respect for the Libyan judiciary and its independence.

However, its slow implementation has been noted as an issue of concern.

In mid-December 2016, Secretary-General Ban Ki-moon cautioned that “the road to peace is long” and the Libyan people have not yet achieved the stability and security they deserve.

At the time, Mr. Ban also urged the parties that are not currently engaged in the process to join efforts to find a consensual solution to the ongoing crisis. 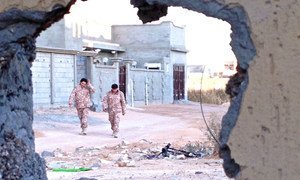 Marking the one-year anniversary of the signing of the Libyan Political Agreement, United Nations Secretary-General Ban Ki-moon today commended all Libyans who engaged in the “milestone” process, but cautioned that while much progress has been made, “the road to peace is long” and the Libyan people have not yet achieved the stability and security they deserve.