The United Nations envoy for Syria has welcomed the announcement of a nationwide ceasefire between the Government and armed opposition groups that would come into effect at midnight tonight.

According to a note issued by his spokesperson, UN Special Envoy Staffan de Mistura hopes that “the implementation of the agreement will save civilian lives, facilitate the delivery of humanitarian assistance across Syria, and pave the way for productive talks” in the Kazakh capital of Astana.

The Special Envoy is of the view that these developments should contribute to inclusive and productive intra-Syrian talks the UN intends to convene on 8 February 2017, the statement added.

Meanwhile, the UN Office for the Coordination of Humanitarian Affairs (OCHA) reported today that four million people in the Syrian capital, Damascus, and surrounding areas have been cut off from the main water supply since 22 December.

Two primary sources of clean and safe drinking water that serve 70 per cent of the population in and around Damascus are not functioning, due to deliberate targeting resulting in the damaged infrastructure.

The UN is concerned about the lack of water which could lead to waterborne diseases, particularly among children, and about the financial strain this is having on families, said OCHA, noting that throughout Syria, close to 15 million people are in need of water assistance and households spend up to 25 per cent of their income to meet their daily water needs.

“The United Nations calls on all parties to reach peaceful agreements to alleviate the suffering of civilians, and that basic services, essential for survival, such as water supply, must be safeguarded and protected at all times,” OCHA emphasized.

As the Syria crisis enters its sixth year, civilians continue to bear the brunt of a conflict marked by unparalleled suffering, destruction and disregard for human life. According to OCHA, 13.5 million people require humanitarian assistance, including 4.9 million people in need trapped in besieged and hard-to-reach areas, where they are exposed to grave protection threats. 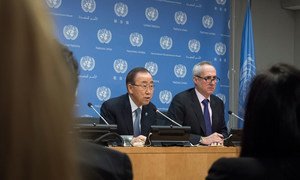