OCHA/Guled Isse
Humanitarian partners in Somalia are scaling up response to displaced people after violence broke out in Gaalkacyo on 7 October 2016.
24 December 2016

Expressing concern over renewed violence in the Somali city of Gaalkacyo, the Special Representative of the United Nations Secretary General for the country, Michael Keating, has called on all parties to honor the ceasefire agreement.

At least three people have been killed and several others injured in the violence that broke out yesterday.

According to the UN Assistance Mission in Somalia (UNSOM), which Mr. Keating heads, the city (located on the border of Puntland and Galmudug states) had already been facing a difficult humanitarian situation and food insecurity. Trucks carrying relief supplies for people affected by drought have been blocked on the northern side of Gaalkacyo for the past three weeks due to continuing roadblocks.

“It is unprecedented for humanitarian supplies to be denied access by either side as previously, even amid armed fighting, both sides have allowed humanitarian aid to pass through, in line with international humanitarian law,” said the Mission.

It also highlighted that despite commendable efforts of the Joint Committee of local authorities and elders from Puntland and Galmudug, a stalemate in the negotiations over removing the roadblocks installed by both Puntland and Galmudug is putting the ceasefire in serious jeopardy.

“Puntland and Galmudug must resolve their differences in a non-violent manner and immediately agree on steps to dismantle the roadblocks, reopen the roads, and pull back the forces without further delay,” UNSOM said.

“Any spoiler against peace and stability should be scrutinized.”

Risk of another mass displacement and more human suffering

The Mission also raised alarm that continued hostilities could prompt another mass displacement in the city. Of an estimated 90,000 people displaced as a result of the fighting in October 2016, about 30,000 displaced people have not yet returned due to fear of renewed fighting.

“While humanitarian partners continue to respond to the needs of the displaced and host communities, every effort should be made by all concerned parties to avoid another displacement that would further deepen human suffering,” it added. 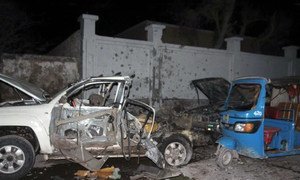 Condemning, in the strongest possible terms, a terrorist attack outside the seaport in Somalia's capital, Mogadishu, the Special Representative of the United Nations Secretary-General for the country said that the bloody act will not stop the momentum of the electoral process.